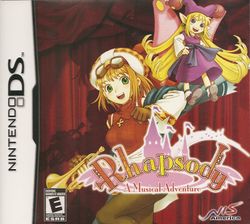 Rhapsody: A Musical Adventure, released in Japan as The Puppet Princess of Marl Kingdom (マール王国の人形姫, Māru-ōkoku no Ningyō-hime) is an RPG for the Sony PlayStation and Nintendo DS. The game was developed by Nippon Ichi Software, and published by Atlus USA (for the PlayStation version) and NIS America (for the DS version). To date, this is the only game in the Marl Kingdom series to be released in the US.

Rhapsody, along with its sequels, are often called musical RPGs, because in place of the cutscenes usually seen in other RPGs, the game will have musical numbers, complete with vocals. This game in particular is also known for its cuteness and low level of difficulty. These factors have lead to the game remaining rather obscure in North America, despite being a fairly popular title (and series) in Japan. Additionally, the difficulty of handling localization of a game that contains fully voiced musical numbers may have limited the willingness of many publishers to attempt localization of the series.

The game centers around the adventures of Cornet, a girl who can talk to puppets and has a magical horn that grants wishes, and Kururu, a puppet that has the heart and soul of a human. The majority of the game is about Cornet and Kururu trying to save Prince Ferdinand (whom Cornet has a crush on) after he has been turned to stone by the self-proclaimed "most beautiful witch in the world." The witch, Marjoly, also has a crush on the prince and had meant to put him to sleep, but messed up the spell and turned him to stone instead.