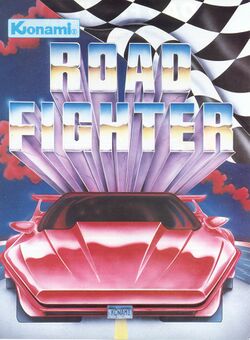 Road Fighter is a very simple overhead perspective racing game. The race course is presented continuously upwards. The player begins in 40th place, and must make their way to 1st place across 6 different sections of the course. Along the way the player must maneuver their car between innocent bystanding cars, as well as opponent racers.

One particular feature that makes Road Fighter stand out is the fact that when the car crashes, it doesn't necessarily explode on the spot as in many other racing games of the time. Rather, the car begins to slide in the direction it was bumped. At that point, the player has the opportunity to correct the slide by pushing the joystick into the direction of the slide, righting the orientation of the car. If the player fails to do this in time, the car will spin out of control and will crash on the side of the road.

Interestingly, for a Konami game, Road Fighter wasn't outstandingly popular, and as a result made very few appearances outside of Japan. The game was ported to the MSX home computer and the Famicom, two systems that Konami greatly supported. The game technically did arrive for the NES after a time, but only in Europe, and never in the United States. The home console versions also removed the competition aspect from the game and made it strictly a survival racing game. There is also no lap ranking on the home console versions and the NES version of the game only contains 5 stages.

Note: The MSX version uses only one button for the gas.

Out of all the cars that you see on the road, only two types are actually competing in the race. Your red car, outfitted with a V12 DOHC 2500PS engine is one, and the off-white car on the right represents all 39 of your other opponents. Unlike every other car, the cars of your opponents drive fast (but not as fast as you) and are better at avoiding traffic than most, but they will slow down dramatically rather than crash into a bystander.

There's only one car in the game that you actually want to crash into, and it's this one. When you hit it, you are rewarded with a small amount of extra fuel, as well as bonus points. The amount of bonus points you receive rises with each consecutive fuel car that you catch, starting with 300, then 500, 1000, 2000, 3000, 5000, and up to 10000. If you miss just one fuel car, the score drops back down to 300. They never change lanes, so when you see one, you must make it over to them before they scroll off the screen.
Note: In the MSX version, these appear as hearts with wings instead of cars.

The remaining cars on the road are simply joy riders who happen to be occupying your course. They vary in behavior, ranging from the yellow cars on the left who never change lanes and just move with the road, to the white car on the right who moves very erratically and often gets in your way while changing lanes.

The trucks are one of the most hazardous occupants of the road. One collision with them, and you won't start skidding, you simply crash. Avoid them at all costs. If that weren't bad enough, the bay doors of the trailer truck shown on the right will fly open in the middle of the road, and barrels will roll out of the back of the truck. Collision with these also results in an immediate stop.

The longer you are on the road without any collision interruptions, the more likely you are to see bonus objects appear. While only one appears at the top and moves down, the rest of them appear from the bottom and work their way to the top of the screen. If you keep the car on the road from the moment these objects appear to the time that they scroll of the screen, you will be awarded a 3000 point bonus. Such objects include the airplane and Konami Man. Other objects include trains that appear on the tracks to the left of the road in certain scenes.
Note: This is the very first appearance of the Konami Man character in any Konami game. Konami Man would appear in a few games as a bonus until he got his own game (along with Konami Girl) in Konami's Konami Wai Wai World for the Famicom. 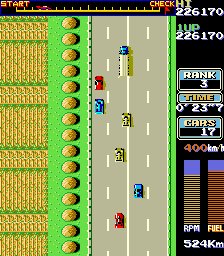