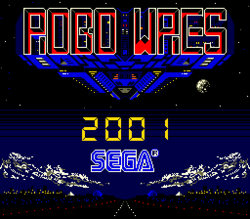 Robo Wres 2001 is a wrestling arcade game that was released by Sega in 1986; it runs on the same hardware as their earlier (Sanritsu-developed) 1984 wrestling game, Appoooh (a Zilog Z80 and three Texas Instruments SN-76496s, running at 3.072 MHz, with one OKI MSM-5205 running at 384 KHz). The players must take control of two of six different robots (indicated by the lettering C, D, E, G, I and J), all of which are referred to as "SKY-HI" for the top-left and top-right corners of the screen - and by using an eight-way joystick to move round the ring and three different buttons to attack, you will have to win three rounds in order to win the game. This was also the second time 2001 was depicted in an arcade game of the 1980s; the first time was in that fifth and last unique stage of Konami's Time Pilot (1982), where the Earth was under attack from an invasion of alien saucers which had to be stopped.