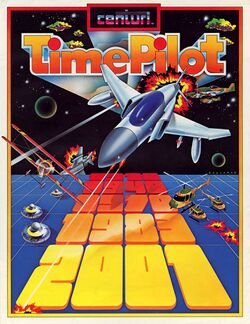 Time Pilot is a 1982 arcade game by Konami and distributed in the US by Centuri, designed by Yoshiki Okamoto. Yoshiki was told to design a driving game. When he learned of the game's concept, he balked at making it and started on Time Pilot. As development continued, Okamoto showed his boss design docs for the driving game, all the while working on Time Pilot. Although his boss told him to do the driving game instead, he tried to take the credit for Time Pilot. Okamoto decided not to disgrace his boss and let the matter drop.

Time Pilot was successful due to its simplicity and non-stop intensity. Enemies came at you constantly, but your plane always seemed to be able wriggle out of tight spots. Coleco purchased the rights to publish the game for home consoles, while Konami proceeded to publish the game on the popular MSX computer system in Japan. It was released for play on the Xbox Live Arcade in 2006.

In Time Pilot, you take control of a fighter craft with incredibly aerial maneuverability, and the unique ability to travel through time. You goal is to engage in aerial combat in five distinct time periods; 1910, 1940, 1970, 1982, and 2001. You must destroy enough enemy air craft until the era's leader appears. Once you destroy the "mother ship" for that time period, you are whisked away to the next period to do battle again. You can rotate through every degree while flying, and you possess semi-automatic firing capability.