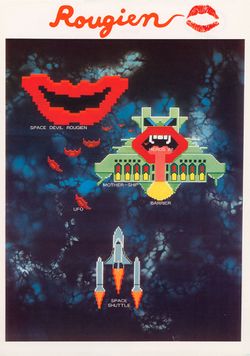 Rougien is a vertical scrolling shooter arcade game which was released by Sanritsu, in 1982; as with Mermaid (which they had developed for the Rock-Ola Manufacturing Corporation), it uses a Zilog Z80 running at 4 MHz, with two General Instrument AY-3-8910s running at 1.5 MHz for sound. The player must use an 8-way joystick to take control of the NASA space shuttle, which is on a mission to defeat the eponymous Space Devil "Rougien" - and when you press the "Firing Button", the shuttle will fire a shot at the enemies, but if any shot fired by an enemy should hit the shuttle it will cost it a life. Enemy lasers, missiles, and "Uchū Tsukue Kaminari" (the last of which is written in Kanji as 宇宙機雷) are all worth 100 points while UFOs are worth 200 points, "Buki Hassha Kuchi" (written in Kanji as 武器発射口) are worth 300 points, and "Rougien" itself (which looks like a giant mouth) is worth 5000 points; it is only vulnerable when it is sparkling, and once you've defeated it you will proceed to the next stage.