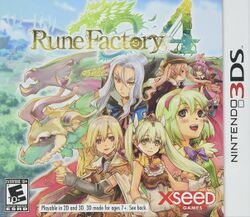 Rune Factory 4 (ルーンファクトリー4, Rūn Fakutorī 4?) is an RPG developed by Neverland and published by Marvelous AQL for the Nintendo 3DS. It is the sixth game in the Rune Factory series, and the first to be released on the 3DS. On January 31, 2013, XSEED Games announced plans to release the game in English in North America. Later, on September 12th, the company announced that official release date being October 1st, 2013. While the game was originally announced for European release, its release was later cancelled in January 2014.

An enhanced version, titled Rune Factory 4 Special, was released for the Nintendo Switch in Japan in July 2019 and worldwide in February 2020. This release features a new opening theme, another difficulty option, and uses Live2D technology for the additional Newlywed mode. This version of the game is also planned to be released for the PlayStation 4, Xbox One and Microsoft Windows in late 2021.