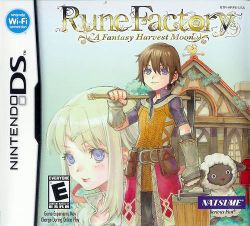 The game takes place exclusively in Kardia, a small city on the eastern tip of the Adonia continent which is surrounded by farmland. The game opens with the protagonist, Raguna, wandering into town. Starved and dehydrated, he collapses in front of the house of a landowner named Mist. Raguna suffers from amnesia, and has no idea who he is or where he came from. Mist discovers him outside her home, fetches him food and water, and because he doesn't know his name, they both decide to name him "Raguna" (changeable). Afterwards, Mist offers Raguna a house on her land if he promises to work the farm. Raguna accepts, and this is where the game begins.