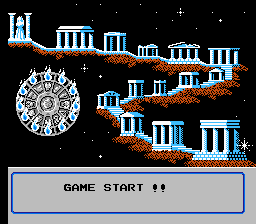 All of the action sequences are single side scrolling stages that occur prior to, or in between, battle sequences with Gold Saints. You will always be running from the starting location on the left to the goal location on the right. Along the way, you will pass various terrain, encounter henchmen, and be forced to hop over gaps.

Before each sequence, you will have an opportunity to assign Cosmo and Life to the Bronze Saint that you have chosen to clear the stage from your Seventh Sense pool. It is important to assign enough Cosmo and Life to survive the stage, but no more than you need so that you have more Seventh Sense to distribute later on. As you clear the temples, the action sequences get progressively more difficult, and your Saints will sustain more damage from attacks, so a greater amount of Life and Cosmo is needed to clear the later action sequences than in the beginning.

Your primary obstacle when clearing the action sequences will be the henchmen who appear in an effort to prevent you from reaching the temple. Although they appear in a variety of colors, there are really only two types of henchmen; runners and archers. The runners can appear from the left or right and approach while throwing projectiles at you. Archers are stationary, and typically occupy narrow platforms that you must use to proceed, while firing arrows at . Touching either a henchman's body or the projectile that they shoot will cause your Saint to lose Life and Cosmo power.

Another obstacle that must be avoided are the falling meteors. Just about every action sequence contains meteors that fall out of the sky at angles, and bounce along the terrain until they fall through the bottom, or break apart. Getting hit by the meteors causes more loss of Life and Cosmo. There are some gaps in the terrain which must be jumped over. If your Saint falls into a gap, they will lose some life and be forced to return to the beginning of the stage. Remember that you can jump higher by jumping straight up, than you can by jumping forward. In addition, you can hold

while jumping to jump even higher than usual. 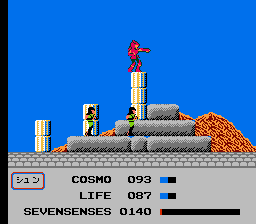 While passing through these sequences, you can use a punching attack against the henchmen. This punching attack is accompanied by a projectile that flies forward a certain distance. The distance that your projectile moves is determined by your Saint's Cosmo level. The higher the Cosmo, the further the projectile flies. After you complete the first temple, you will add to the pool of Seventh Sense power for every henchman that you defeat. The more enemies that you defeat, the more Seventh Sense you will have available to redistribute to your Cosmo and Life meter. You may be tempted to stick around and fight enemies for a long time to build up your meter, but the game will punish you for remaining in one place for too long by raining meteors directly down on your head.

Your projectile can only be fired straight ahead, and cannot be used to attack enemies above or below you. For this reason, there are several occasions when you are forced to jump to an area occupied by an archer that may be on the only available platform above or below you. Since you cannot clear the archer away before you arrive, you will be forced to touch them. This leads to one of the biggest criticisms in the game. In this situation, it is best to continue running past the archer, instead of stopping to defeat the archer. This is true in general of all forced-contact situations: run through them as quickly as possible.

There are a few special action sequences that occur as a result of an attack by a Gold Saint. When this occurs, the rules are the same, although the collection of enemies, obstacles, and terrain will change. They always conclude by reaching a Saint waiting for you on the far right side.

When you complete an action sequence, you will arrive at a one-on-one confrontation with a Gold Saint. Not all Gold Saints are aggressive towards you; some will be compassionate and help you. However, against those Saints which you must fight, you will engage in a battle to the death until only one competitor remains.

Success in these battles is partly determined by skill, but it is rather largely determined by your knowledge of how events played out in the series. By choosing which Bronze Saint goes up against each Gold Saint in accordance with the actual story, you will increase the likelihood of surviving the battle, and keeping the other Saints available for their relevant battles. This leads to the second biggest criticism of the game. If you use the wrong Saint and lose them prematurely, you will find it difficult to survive a fight against a future Gold Saint when that Bronze Saint was necessary.

Before each battle, Athena will offer you another opportunity to distribute your Seventh Sense pool to your Cosmo and Life meters. Hear again, knowledge of how the battles play out in the series will work to your advantage. Some Bronze Saints are unable to defeat a designated Gold Saint until they are first defeated themselves, and inspired to rise back up through the encouragement of a key background character. In these situations, applying any of your Seventh Sense to a Saint before they are defeated can be a bit of a waste, and it is actually better to return all of your Life and Cosmo to the Seventh Sense pool until you are revived and return to the fight.

During a battle, you are given four choices: 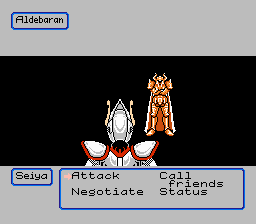 Attack
If you choose to attack, you are presented with a list of your available attack options. Not all of your attacks are present initially. Certain events must occur before you can unlock particular attacks. Once you select an attack, the animation for that attack will initiate. Your opponent will start out in a defensive position. If the attack is successful, the opponent will be battered by the attack, and damage will be taken. If the attack is unsuccessful, the opponent will remain in their defensive position throughout the animation and sustain no damage.

Call friend
If you feel that your Bronze Saint has no chance of surviving a battle (or you realize that you've brought the wrong Saint into the confrontation,) you may choose "Call friend" to swap Bronze Saints. However, if you choose this option, the Saint you select must start from the beginning of the action sequence, and the Gold Saint will be restored to full Life and Cosmo.

Status
Before you make a selection, you may choose "Status" to review the current Life and Cosmo of both your Bronze Saint, and your opponent, which are normally not displayed while you are choosing your next move.

in an effort to dodge the forthcoming attack. The window for you to dodge an attack is very small, and if you press too soon or too late, you will lose the opportunity. You must initiate a dodge as soon as you see your Saint's posture change.

Dodging an attack does not automatically mean that you will successfully avoid taking damage. If you do not move all the way to one side, you will likely sustain some damage from the attack, even if you don't receive the full amount. Likewise, you must choose to dodge to the right or left. On some attacks, you will still receive partial damage even if you move all the way to one side, but not the other. Other attacks cannot be dodged under any circumstances, even if you are able to move. Whether you dodge or not, your opponent will initiate his attack, and the animation for the attack will play. Once this is complete, you will begin your next turn.

Each attack does a calculated amount of damage to an opponent's Life and Cosmo. The amount is calculated as a percentage of the attacker's current Cosmo level. Therefore, the higher your Cosmo, the more damage your attack will do to your opponent. Certain attacks affect Cosmo more than Life, or vice versa. Lowering your opponent's Cosmo will decrease the amount of damage that they can do to you.