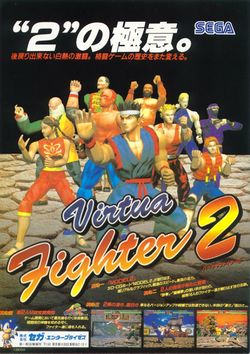 This guide is for the Arcade and Sega Saturn version. For the Sega Genesis remake, see Virtua Fighter 2 (Sega Genesis).

VF2 was known for breakthrough graphics at the time. It used Sega's Model 2 arcade hardware to run the game at 60 frames per second at a high resolution with no slowdown. The Saturn version was also extremely impressive for its time, especially given the system's 3D programming difficulties. It became a huge hit in Japan and sold relatively well in other markets, notably the UK, where The Prince (Hatim Habashi) was crowned by Sega Europe as the Official UK Virtua Fighter 2 Champion.

The arena size could be adjusted up to a very small platform or all the way to 82 meters, which in the genre is considered very large; this is the only game in the series—other than Virtua Fighter Remix—that could have such size adjustments. The physical energy meter could also be adjusted to infinity as well, giving you the advantage when beating opponents in the game or practicing moves against the computer player. Incidentally, players discovered that adjusting the arena to a smaller size and giving the characters infinite health could lead to mock sumo matches, wherein victory is achieved by knocking the other player out of the ring.