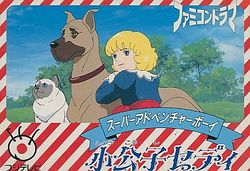 Shoukoushi Ceddie ( , Shoukoushi Ceddie?) is an adventure game developed by Graphic Research for the Famicom and published in Japan by Fuji Television near the end of 1988. Shoukoushi Ceddie (sometimes Cedie) is the Japanese title of the 1886 Frances Hodgson Burnett novel Little Lord Fauntleroy, about a down-to-earth kid from New York discovering his heritage as the heir to an Earldom in England, moving to his inherited estate and learning how to become a nobleman. Fuji Television created a 43 episode anime series based on the novel in 1988, and this video game adaptation is based on that TV show. Fuji Television is perhaps best known in western video game circles for being responsible for Doki Doki Panic (the game the American/European Super Mario Bros 2 is based on) as well as airing GameCenter CX (or Retro Game Master).

The story concerns an American boy named Cedric Errol (more fondly known as Ceddie), who at an early age finds that he is the sole heir to a British earldom and leaves New York to take up residence in his ancestral castle. After some initial resistance, he is joined by his middle-class mother, widow of heir James Errol. His grandfather, the Earl of Dorincourt, intends to teach the boy to become an aristocrat, but Ceddie inadvertently teaches his grandfather compassion and social justice, and the artless simplicity and motherly love of dearest warms the old man's heart.

The game plays much like a regular Famicom adventure game: The player walks around, talks to people and finds items which are used to solve puzzles. However, rather than selecting destinations from a menu, the player manually walks around the different locales using a top-down perspective. There are also action sequences where the player must avoid random pedestrians when leaving the estate. If he collides with an NPC, or goes into the wrong door, he is chided by his tutor and forced to answer trivia questions.