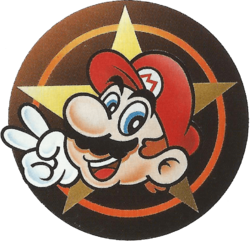 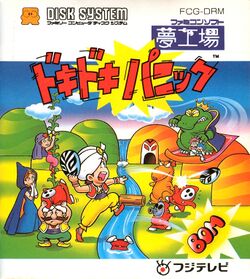 Yume Kōjō: Doki Doki Panic (lit. "Dream Factory: Heart-Pounding Panic") is a 1987 platform game released for the Family Computer Disk System about a family who plans to rescue two children. "Doki doki" is a Japanese onomatopoeia for a rapidly beating heart, and it is commonly found in Japanese video game titles, carrying connotations of excitement and anxiety.

The game was developed in cooperation with Fuji Television to promote its Yume Kōjō '87 (tr. Dream Factory '87) event, which showcased several of Fuji TV's latest TV shows and other products at the time. The game featured the mascots of the Yume Kōjō festival — a family consisting of siblings Imajin and Lina and their parents, Papa and Mama — as its main characters. The rest of the characters, including the main villain, Mamu (known as Wart when localized for Super Mario Bros. 2), were all creations by Nintendo for the game. The game takes place within a book with an Arabian setting. All four characters are playable, and the game is not fully completed until the player plays through as all four.

Even though it was not originally conceived as a Mario game, Shigeru Miyamoto had a larger involvement in this game than he did with the original Super Mario Bros. 2 (known outside Japan as The Lost Levels) which was released in Japan. Some elements from the Mario universe already existed in Doki Doki Panic, such as the Starman, coin and jumping sound effects, the POW blocks and level warping. Also, the game's soundtrack was already composed by Kōji Kondō, the original Super Mario composer, and upon the conversion needed only a few alterations such as removing most of the Arabian elements, replacing them with original Super Mario tunes.

In 1988, the game was localized for North America, Europe and Australia as Super Mario Bros. 2. The Yume Kōjō family members were replaced by Mario, Luigi, Princess Toadstool, and Toad, and numerous other small changes were made, such as the B Button on the NES controller making the characters run. Yume Kōjō: Doki Doki Panic represents the original source of several elements that later became common in the Mario series, such as characters Birdo and Shy Guy.