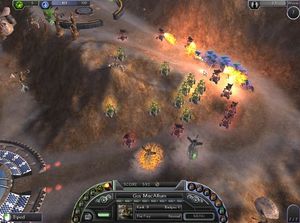 The Fray. A tactical mistake was building too many flamethrowers against shielded targets.

This will be the first mission, which will also contain a short tutorial. If you follow the tutorial, you will go through a short sequence describing the basics of the game, where enemies are dropped at designated locations, and will follow the path until they reach the city. It will also teach you how to purchase and sell towers (costing 3 resources overall).

In the first mission, the best position for the towers is at the turn, where enemies can take the most damage from towers. If you are playing the mission for the first time, you will need to use cannons to take out the enemies.

There are seven waves in the mission:

When you complete the mission, you will be given rewards based on performance. You may win one of five badges, three of which are based on general performance, and the other based on completing specific tasks. To get the bagdes for specific tasks, you need to complete the level on Hard or Insane, and perform the following within a given attempt and win:

Note that if this is the first time playing, it is impossible to obtain a performance-based badge based on your difficulty level. To do so, you need to replay the mission and use support to get extra points.

When you complete the mision, you will unlock anti-air flak, mortars, the laser, and fire bomb.

This mission will introduce you to the concept of support. Support is supplied by energy, a resource that automatically regenerates over time. At the start, you only have access to two different support weapons, the laser and fire bomb.

By wave 14, you will see Tripods, a tough shielded unit. While a normal set of turrets (including a flamethrower on each pinch, and a mix of mortars and cannons) can inflict damage, you may want to get ready for them. While flamethrowers are good against groups of units, they aren't effective against these enemies.

At wave 19, you will see flying units. This shouldn't be a problem unless you were attempting to build an excessive amount of flamethrowers. While you do have a dedicated anti-air turret, these units can be taken out by cannons.

The first special badge requires you to upgrade a turret to level three, which can only be completed on a mission replay.

If you are trying to get the second special badge, you may need to wait until you have access to a custom officer. Provide this custom officer with power stations and another damaging turret, while giving the laser, missiles, mines and drones as support. Alternate between lasers and missiles, and use the two other support items to help prevent creeps from getting through. Once you meet the quota, sell the power stations (if desired), and setup a level three turret near the colony to make sure nothing gets past.

This is the first mission where enemies have two landing zones, but they will converge into the same path. One of these paths has a short bend, allowing easy coverage with a short-range but highly damaging turret.

Air units will appear on wave 6. While you can hold them off with the standard cannons or other turrets, you may want to build the Anti-Air Flak in case one of the flyers slips through. However, since the 8th wave may be the first likely one to reach your base, you may want to focus on an effective defense.

The final wave consists solely of Hover Tanks. As such, any heat turrets will be less effective than other choices.

There are two landing zones, but they are different distances from the starting area.