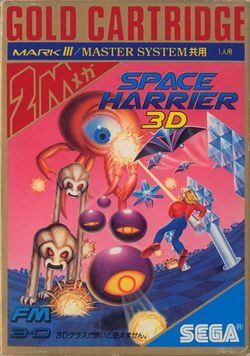 Space Harrier 3-D (スペースハリアー3D, Supēsu Hariā Surī Dī?) is a video game developed by Sega in 1988 for the Sega Master System. It is a sequel to the original Space Harrier. Playing the game in requires the SegaScope 3-D Glasses. Upon achieving a high score to input a name, a cheat code is available in the game to disable the 3-D effects which is hard to achieve without the glasses due to the distortion caused by the 3-D effects. The game was later ported for 3DS by M2 and released as a part of Sega 3D Fukkoku Archives on 18 December 2014. Space Harrier 3-D is a fast-paced three-dimensional action game. Like the original, the game involves a super human hero who runs and flies towards a forever distant background on a checkerboard-styled ground. As the playing field moves forward, enemies come from behind and from the far distance to attack the character, by either firing a projectile or trying to crash into him. The player must also dodge large objects in his path, some of which can be destroyed. One hit from an enemy or a crash into these large objects will cause the player to lose a life.

The Space Harrier returns to stop an evil tyrant from corrupting the peaceful Land of the Dragons by finding Euria, the missing heir to the throne. The player character can run across the ground or fly using his flight belt. There are thirteen game stages, and the player fights an evil captain at the end of each stage. After completing all 13 stages, the player must then fight each of the captains, one at a time in sequence; after that, the evil king then comes after the player to prevent the player from ending his tyranny over the Land of the Dragons.