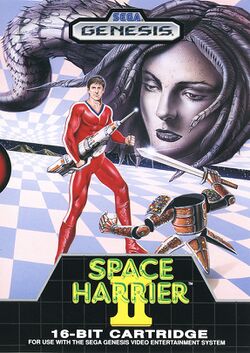 Space Harrier II (スペースハリアーII, Supēsu Hariā Tsū?) is the sequel to Space Harrier, developed and published by Sega. It was one of the original launch titles released for the Sega Mega Drive in Japan and one of the six Sega Genesis launch titles in the U.S. It was also later released on the Wii's Virtual Console service. Like Altered Beast, another launch title for the Mega Drive, Space Harrier II features digitized human voice recordings during the game play, and is also an example of some of the Mega Drive's early sound, composed by Tokuhiko Uwabo (credited as "Bo"). Due to the inability of the Mega Drive to scale sprites, enemy, landscape, and shadow sprites are pre-rendered at different sizes.

Like the original, the game involves a super human hero who runs and flies towards a forever distant background on a checkerboard-styled ground. As the playing field moves forward, enemies come from behind and from the far distance to attack the character, by either firing a projectile or trying to crash into him. The player must also dodge large objects in his path, some of which can be destroyed, such as trees, and others that can not be, such as ionic columns and pylons. One hit from an enemy or a crash into these large objects will cause the player to lose a life. Smaller objects, such as foliage, will only cause the character to trip; however, this leaves him vulnerable to attack for two seconds.

There are a total of 12 stages, each with its own end boss. A stage usually consists of different landscapes (small objects vs. large objects), and can also move at different speeds (slow vs fast). Some stages, such as Stuna Area, have a mid-level boss that can be easily defeated. Although the player can select any stage to start the game at, all twelve levels must be completed before moving on to the Final Chapter stage. It is here that the player must defeat all the main bosses over again, and then fight the Dark Harrier.

In the year 6236, Harrier once again receives a call for help, this time from the 214th sector, light-years from his cruiser. Harrier travels there quickly with his "cosmic gate", and finds that Fantasy Land is once again being overrun by hostile forces. He resolves to once again save a world by fighting off the entire force himself.