Fors Yard introduces the Barbarian enemy. Once a boss in the original game, now multiple Barbarians attack. They resemble skulls surrounded by vegetation. They typically fly across the background, and then advance toward you. Muka Densu MK II ships will also appear. Be sure to fly carefully and avoid the indestructible pillars. 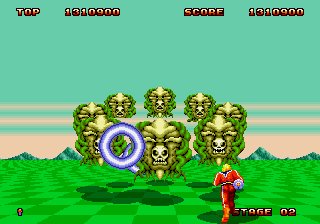 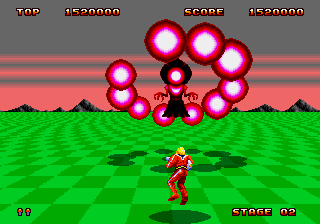 When Paranoia first appears, it is surrounded by ten orbs which rotate around Paranoia at various angles. Paranoia is invulnerable to your attack until you manage to shoot and destroy every one of those orbs. While any orbs exist, Paranoia will simply drift back and forth, flying closer and farther from you, shooting fireballs at you whenever it retreats. Be sure to move around the screen whenever it flies away from you. Once the last orb is destroyed, Paranoia rushes to the center of the foreground and simply stops. You must then pelt it with bullets as fast as you can, in an effort to destroy it before it decides to retreat and get away. If it begins to retreat, it will shoot fireballs at you as it leaves. Paranoia changes from pink to blue as an indication that it's taking damage.