Zero Polis brings about the inevitable introduction of one of the Harrier's most enduring foes: the Neo Dom robots. Like their predecessors in the original game, Neo Doms come in a variety of colors, each with their own signature behavior. Take this opportunity to learn the colors of each Dom so you can identify their attack pattern and counter it before they get too close. But beware, there's another eerie enemy present here that you'll meet for the first time. 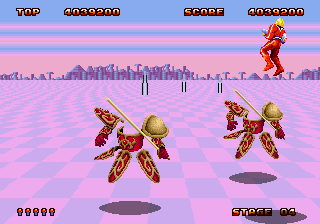 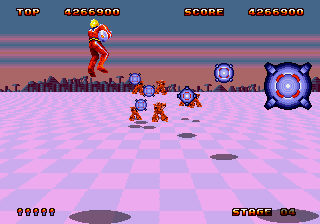 When you reach the end of this stage, you will encounter a force of eight Neo Doms who remain at a certain distance from you, firing a barrage of missiles at you. You'll have to stay in constant motion to avoid getting hit. But you'll also need to fire at them to take them out. So it is recommended that you travel in a sideways figure 8 motion, shooting at the Doms whenever you cross through the middle. After you manage to destroy a few, the Neo Doms will stop shooting and begin to approach you. Keep shooting towards the center of their cluster in order to remove as many as possible before they get too close. If they reach you, it is still possible to survive if you've cleared out a band near the top or the bottom. Then they will begin to retreat until they've disappeared, or you've destroyed the remainder of them.