Felcold is another stage where a ceiling covers up your view of the horizon. In addition, the floor and the ceiling have an eerie glow about them as they oscillate between red, blue, and white, which can be a little harsh to look at for a long time. Muka Densu ships rule the stage, with a brief appearance by Pearlshell clams in the middle. 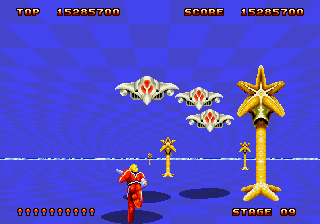 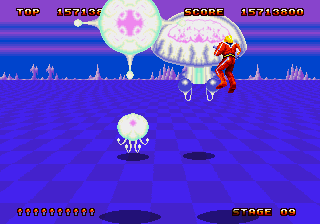 Cragon resembles a giant jellyfish. He will fly in from above you, move away from you a bit, and then prepare to attack. When it begins, it will move around the screen, a bit further away from the player when it moves to the left, and closer to the player when it moves to the right. In this first phase, it is invincible to attack, and it releases spores that fly towards you while it floatsaround. In order to advance to the second phase, you must actually destroy enough of the spores to agitate it. After you've shot around ten spores, it will stop floating around, and begin to approach you very slowly. You must now shoot it enough to destroy it before it rises off the top of the screen and gets away. Either way, you will advance to the next screen.