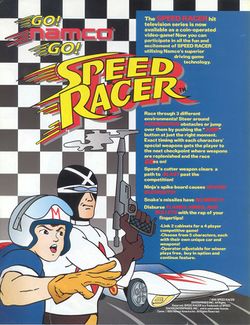 Speed Racer is a racing arcade game that was released by Namco-America (Namco's United States division) in 1995; it's the only other game that utilises the same hardware as their Japanese division's Final Lap R (an Intel I960KB running at 20 MHz, and Mitsubishi M37702 running at 16.128 MHz, with a C352 custom sound chip running at 24.192 MHz for audio). Based upon Tatsunoko Production and Yomiko Advertising's 1967-68 anime series of the same name, up to four players may play this game simultaneously, when a pair of two-player cabinets are linked together - and they must use a steering wheel, a pedal and three buttons to take up control of one of five characters from the show (including Ninja and Snake, in addition to Speed himself, and each one has their own unique car and weapons) in one of three different environments. Unlike in any of Namco's earlier racing games the players can jump over obstacles if they push the appropriate button at the right moment; the company's signature character, Pac-Man, also appears above their logo during its attract mode (in anthropomorphic form).