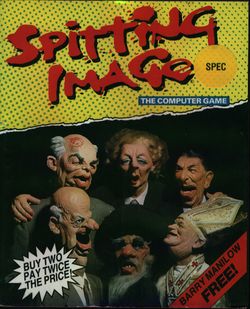 Spitting Image (full title: Spitting Image: The Computer Game) is a one-on-one fighting game, that was developed by Walking Circles for Domark and released upon the Sinclair ZX Spectrum, Amstrad CPC, Commodore 64 and Commodore Amiga in 1988; it is based on the Central Television series of that same name, which featured latex puppets of major public figures. The celebrities featured in this game are then-current Ayatollah Ruholla Khomeini (1901-1989), then-current USA President Ronald Reagan (1911-2004), who is dressed like a clown, then-current South African President P. W. Botha (1916-2006), the then-current Polish Pope John Paul II (1920-2005), then-current UK Prime Minister Margaret Thatcher (1925-2013), although that show's favourite was Harold Wilson (1916-1995), and then-current USSR President Mikhail Gorbachov whose famous birthmark was made to look like the Communist symbol - and, as you can see from the image, the cover art says "Barry Manilow Free!", as he was just one of the many other celebrities who was "puppetised" for the show when it existed.

This is taken from the back of the cassette's, or disk's for the case of the Commodore Amiga version, inlay card, the front of which is shown in the image to the right; it reflects the show's satirical humour:

SAVE THE WORLD!
Within the next seven years a world war will take place. A war so great that
even the Swiss will get involved this time. A war so terrible that Italians
have already surrendered. One leader will emerge from this war to rule the
world.
It is your task to stop this leader and SAVE THE WORLD.
© Central Independent Television PLC 1988

Once you have put the cassette (or the disk, for the case of the Commodore Amiga version) of the game into the cassette recorder of your ZX, CPC, or Commodore 64 (or into the Commodore Amiga itself), connected both of them (or it) to your television, and switched all three (or both) of them on, type LOAD "" (without leaving a space between the quotation marks) and press Enter to load the program into the console; the game's story will now start scrolling up the screen, only with the added bit of "THERE ARE SIX CHALLENGERS FOR WORLD POWER..." at the end. The game will then proceed to its starting screen - and you shall have to select the leader who is about to get beaten up, then select the leader who you would like to do the beating up, as this will be the one you shall control. From there, you'll be taken to the home country of the target leader (Khomeini: Old Ayatollahs' Rest Home, Reagan: Ronnie's Restaurant, Botha: Loftus Versfeld, Pope: Pope World Tour '88, Thatcher: 10 Downing Street, Gorbachov: The Kremlin); to beat a CPU-controlled opponent, you will have to win a "best-of-five" series of fights, and if you do, the game will return to the map screen, where an image of the Grim Reaper ("It's a lot less bovver than a hovver.") will have taken the place of the leader you had defeated. You will then have to select two more leaders for more of the same, and if you win again, two more - and when only one leader remains, he (or she, if it is Thatcher) shall rule the world. The game will now go into "high-score" mode; your score will most likely be the highest on the console to date, so you should enter your name at the top of the table with pride. Once you have done so, the game will go back into attract mode - and it is also possible to play with a friend, by selecting the 2 on the map screen. Both of you must then choose a leader to control and fights will still be "best-of-five"; however, you can't "save the world" in this mode. In the Commodore Amiga version, P.C. Norris Dimbleby, who was created specifically for the show when it started in 1984 as a sidekick for the puppet of Sir Kenneth Newman (1926-2017, head of the UK Metropolitan Police at the time) can also be seen standing outside the door of 10 Downing Street.