From StrategyWiki, the video game walkthrough and strategy guide wiki
< Spy vs. Spy II: The Island Caper
Jump to navigation Jump to search

Like the original game, strategy is the most important element of Spy vs. Spy. You must outsmart and outmaneuver your opponent in order to be the first spy to reach the submarine with the fully assembled missile. In order to do that, you have a number of options at your disposal. Among them, you can:

Typically, your game will consist of a combination of any one of these strategies, so it's best to know how to use them all effectively, especially against a good opponent. 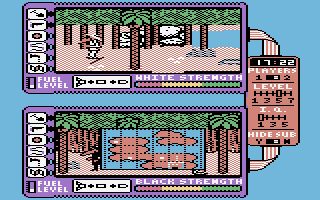 Black Spy looks at the map

Each spy can only hold one contiguous piece of the missile at a time. In other words, they can't carry to unattached pieces, but they can carry two pieces that have been assembled into one piece. The only two pieces which can't be attached is the very first and very last pieces; every other combination can be combined.

Remember that to assemble the missile, you must place one piece in the sand and hold the other piece. Then stand over the piece on the ground, hold the button and pull the joystick down to instruct the spy to assemble the two pieces. Don't forget to pick up the newly assembled missile piece. Once two pieces of the missile have been assembled, it is not possible to break them apart. Therefore, once you have assembled two or more pieces of the missile, you will risk losing the entire thing, not just parts of it, if the other spy gets the better of you.

One of your biggest tools to narrowing down your search for items is the island map, which you can view as the sixth option of your Trapulator. Calling it up allows you to see the layout of the island (or islands). Note that making use of your map costs you time, and provides your opponent with a free peek at the map. Since you and your opponent share one common timer, there is no time penalty for looking at the map, but you will notice that it opens a little slowly in this version, so don't access it too frequently. Get a good enough look at the map for as long as you need it, and no longer (because your opponent might be looking too), and commit as much to memory as you can.

When you activate the the map, it will partially obscure your view of the island. Your current location is represented by the lareg dot of your color. The general path that you've taken as you travel across the island is represented by small dotted lines. Any missile pieces are represented by dots. The map does not tell which pieces they are or how many are in a particular square, just that something you are looking for is there. The Trapulator displays which pieces you and your opponent are in possession of as you ready your escape.

Combat has changed a bit from the previous version. It is no longer possible to be temporarily knocked out of the game. Rather you can be removed from the game permanently. This will happen if your health meter is entirely depleted, either through combat or some other event like a hazard or trap. When this occurs, your opponent is free to play through the remaining time in the game without interruption from you, nearly assuring victory. If your health meter is too low, it is wiser to avoid combat unless it is absolutely necessary to prevent your opponent from winning. While disengaging in combat, your health meter will slowly regenerate. Each spy has roughly just over 100 points of health at the start of the game. 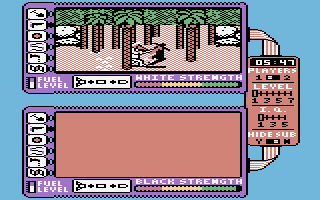 When both spies occupy the same region, the view changes. The view of the spy who occupied the region first remains the same, and the view of the second spy to enter the region shuts off. Both spies are now depicted in a single player's view. At this time, the button no longer functions for the usual purposes of examining objects or setting traps. However, it can be used to pick up or put down objects when you stand far enough away from one another. The primary use of the button is to engage in combat.

To fight against your opponent, you must hold the button down, which reveals your spy's baton. There are two methods to attack. With the button held down, you can push the joystick back and forward to make a jabbing attack. This hits your opponent in the gut. Or you can push the joystick up and down, which swings the baton down on your opponent's head. When both spies are fighting one another, it is the spy who initiates the attack quickest that gets credit for the attack. There is no difference between the effects of either attack beyond their appearance. Each hit from a baton costs 3 health points.

There is exactly one gun on the entire island, regardless of level. If a spy finds the gun, it will become available for selection on their trapulator. When holding the gun, the player must press and hold the fire button down and pull the joystick down in order to fire the gun. Merely pressing the button returns the gun to your jacket pocket. The gun holds eight bullets, but many of them are duds. The lower the level, the more duds you are likely to fire. Once the gun is out of ammo, it will make a higher pitched noise to indicate that the gun is useless. Getting hit by a bullet costs 16 units of health. If you are struck with a baton while holding the gun, you will drop it.

The island features a few hazards that each spy must attempt to avoid, or face losing health. They are as follows:

Setting traps throughout the island, if done right, can be a sneaky way to gain the upper hand over your opponent. Any spy who triggers one of the set traps loses health and is temporarily incapacitated if they aren't killed. They will also drop any pieces of the missile that they were holding on the ground nearby. Traps do not care who set them; you can become the victim of a trap that you set if you're not careful. Each trap has a required ingredient. The number of traps you can set are limited by the availability of the supplies that you have in your possession, and what can be found on the ground throughout the island.

Unlike the first game, there is no way to disarm a trap once it has been set. You must do your best to avoid any and all traps set by yourself and your opponent. Below are a list of the traps you may set. 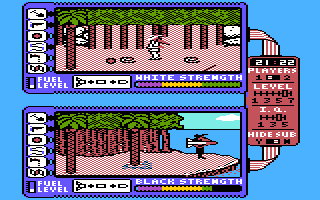 Once you've found every missile piece, and completely assembled it, you're ready to find the submarine. If the "Hide Sub" setting is chosen, the submarine remains hidden until one player has assembled the missile. Then the location of the submarine becomes visible to both players. The submarine will only appear off the northern coast of the island, but you must still determine for yourself if it is off the east coast or the west. Finding the submarine without possession of the completed missile will do you no good, and will likely cause you to lose health by drowning or shark bites. 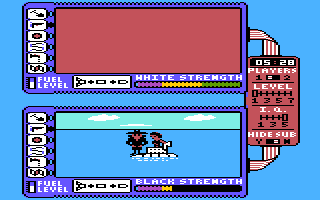 The location of the submarine does not come into as much strategic play as the location of the airport did in the first game. If a player has the completed missile and is on his way to the submarine, there is little you can do about it other than intercept him and fight him to the death. If the opponent begins to look for the submarine on one side of the island, prepare to face him on the other side in case he is wrong, as he will be force to pass your way if he chose the wrong side, and he is likely to be weak from swimming.

The strategy that you employ for this game will differ drastically if you are playing against another person, compared to playing against the computer. The computer is a pretty predictable opponent. As mentioned above, it will run around the island with little concern for what you do, and primarily save dealing with you for when it has no choice. If left uninterrupted, it will gather all of the missile pieces and head straight for the submarine. Combat with the computer can be difficult at first, but practice can eliminate the challenge. The higher the computer IQ, the more the computer will try to preserve its life and run away if it is getting beat too badly.

Playing against another player, on the other hand, presents its own unique set of challenges. For one thing, you can see everything that the other player is doing. Any time you look at the map, or set a trap, the other player could potentially be watching. Since combat will generally come down to who is better with the baton, the weaker fighter will have to outsmart the opponent instead of relying on brawn. Invariably, the spy left empty handed near the end of the game will attempt to ambush the winning spy before he can make it to the submarine. The entire game can turn with a single battle.