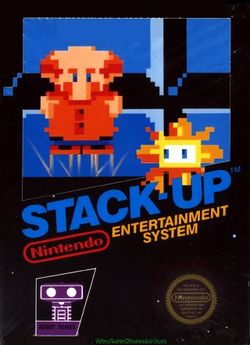 Stack-Up is the rarer of only two titles that were developed to be used in conjunction with the Nintendo R.O.B. (Robotic Operating Buddy) accessory. R.O.B. was essentially a marketing trojan horse that convinced retailers to stock the NES in the United States where video games were seen as a passing fad. Without the toy connection, stores would not consider purchasing another video game system that they believed was doomed to failure.

In Stack-Up, the player uses Professor Hector (along with second player Professor Vector) to direct R.O.B. The player's goal is to move the blocks arranged on the block trays from the current state to the goal state depicted on the screen. The player does this by getting the Professor to jump on buttons that correspond to commands that R.O.B. interprets and executes. There is very little oversight done by the game as to whether the player's plan actually succeeds in creating the goal state, and as such, the player is the only one who determines if the stage was completed or not.

A complete Stack-Up comes packaged with two foam hands for R.O.B., five block trays that are arranged around R.O.B.'s base, and five colored blocks (red, blue, yellow, green, and white). In the United States, R.O.B. was packaged with Gyromite, but in Japan, he was actually included with Stack-up, which was known as Block Set. As a result, Stack-Up is a harder to come by than Gyromite. The Stack-up cartridge also contains one of the highly sought after Famicom-to-NES converters since early versions of the ROM were not converted to the NES cartridge format.

The goal of all of the one player games is to get the stack to look as it does in the initial or current state to look as it does in the goal state. In the two-player Bingo mode, each player must compete to get the most number of blocks on their side. In order to direct R.O.B. to move the blocks, you must provide him with one of six instructions. The method that those instructions are given differs slightly between each mode of play. The instructions are as follows:

This mode is used exclusively to ensure that R.O.B. is properly positioned to receive commands from the TV screen. If R.O.B. is set up correctly, and able to see the TV clearly, the red LED on top of his head should blink on and off, indicating that the test was successful. If the LED does not blink, it is necessary to move R.O.B. around until the LED begins to blink. 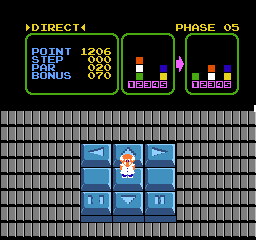 In Direct mode, the player controls Professor Hector as he jumps on a 3x3 grid. The six instruction symbols are printed on the top three and bottom three buttons. As soon as Hector jumps on to one of the six instruction buttons, the instruction is executed immediately by R.O.B. Your objective is to move the blocks from their current state (indicated in the center of the top of the screen) to the goal state (indicated on the right edge of the top of the screen). The correct starting position for stage 1 is always all five blocks stacked on tray three in the following order from top to bottom: red, white, blue, yellow, and green. When you feel the blocks are situated in the goal state, you press the

button to let the game know that you are ready to advance to the next stage (the game can in no way determine whether or not you finished... or at least it wasn't programmed to). The next stage will start with the blocks in the state that you just set them up in. Remember that R.O.B. will not execute any instruction that you give him until he is completely finished with the previous one. You can see how many steps it took you to complete the stage, and compare it to what the game considers par, or the average number of steps that it should take to succeed in achieving the goal state. Your score is determined by the following formula: 10 x (Par - Steps) + Bonus 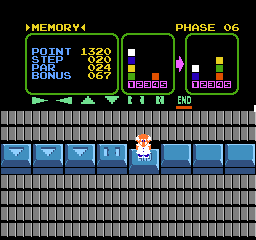 When the player is ready to execute the sequence, press the

to indicate that the sequence was successful at reaching the goal state, or

to quit and return to the main menu. Again, as easy as it might have been to add some state checking to the game, Stack-Up is in no way capable of determining whether you were successful or not. Scoring is the same as in Direct mode. 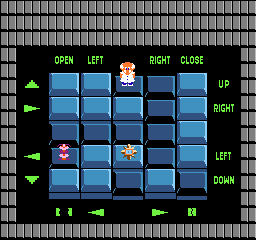 Bingo mode does not concern itself with the color of each block. You only need to get any block of any color into the goal state indicated at the top of the screen. The reason for this simplification has to do with the added complexity involved with giving instructions to R.O.B. Professor Hector must jump on a 5x5 grid (as well as the spaces around it, which he can wrap around the screen to reach). When he depresses five buttons in a row or a column, the instruction associated with that row or column is executed, and the state of the buttons are reset. To make matters more difficult for you, there are two glitches present on the stage as well, Flipper and Spike. Spike starts out on the stage with you. If you hit him, you will be ejected from the stage, and returned to the outside of the grid. Flipper shows up a little later, and hitting him has the same effect as hitting Spike. In addition, Flipper is capable of toggling the state of the buttons that he jumps on. He jumps in a straight line, and can contribute to an instruction being executed, which is generally not what you want to have happen (unless, of course, you actually want the instruction that Flipper is about to activate.) The problem with this mode is that if the wrong instruction is inadvertently activated by Flipper, R.O.B. may potentially knock the blocks over. In order to indicate to the game that the blocks are properly arranged in the goal state, you must press the

button to pause the game, which shows the goal sequence, and press

will return you to the main menu. Scoring is the same as Direct mode. 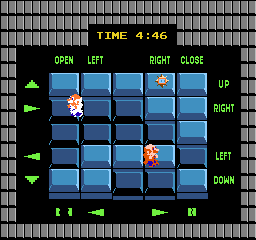 The goals for two player Bingo is even less defined than for one player Bingo. The blocks may be arranged in any position at the start of the game. The instructions recommend that you begin with three blocks stacked on tray 3, and one stacked on trays 2 and 4. Once the game begins, Professors Hector and Vector will begin on opposite sides of the screen. Spike will also be present, but Flipper will never appear. The goal is to get as more blocks on your side than the other player's. Trays 1 and 2 belong to Player 1, while trays 4 and 5 belong to Player 2. Hitting Spike will send a player flying off screen, only to return to their starting position. Only this time, the player will flash for roughly 20 seconds, and will move at half speed until the flashing stops. The same thing will happen if one player jumps on to the other player while stationary. The game will run for five minutes. Either player can press the

button to pause the game, but pressing Start will not do anything since there are no stages. When five minutes is complete, the player with the most blocks on their trays is the winner.