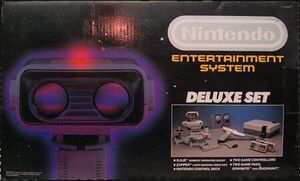 R.O.B. (which stands for Robotic Operating Buddy) is an accessory that was initially bundled with the Nintendo Entertainment System in the United States. Only two games were ever released for play with it, Gyromite and Stack-Up. It operates on 4 AA batteries, while the separate Gyromite spinner requires 1 D battery. R.O.B. must be positioned a certain distance directly in front of the television set to work properly, since it receives instructions from flashes that occur on the screen.

After the video game market crashed in the North America around the end of 1983, retailers did not wish to gamble on video game systems any longer. Fire sales and tons of unloaded low-quality stock left store owners with bad memories that persisted long after the market had faded from general consumer interest.

Meanwhile, in Japan, the video game market was flourishing, primarily due to one system in particular, the Nintendo Famicom. The president of Nintendo (at that time), Hiroshi Yamauchi, knew that the Famicom could be just as successful in America if only he could convince the market to take the risk and sell the system. At first, they approached Atari, but negotiations failed, and Yamauchi tried a different tactic.

He charged his son-in-law, Minoru Arakawa, with the task of preparing the Famicom for the American market. Arakawa was already overseeing the distribution of Nintendo arcade games and the handheld series known as Game & Watch in North America. Generating interest for the Famicom was his most challenging task. The system underwent a redesign, where in gained the moniker Nintendo Advanced Video System, and was intended to look less like a video game system, and better able to blend in with modern home electronics (such as VCRs). Despite the redesign, Nintendo could not generate enough interest in selling the system to retailers.

Upon going back to the drawing boards, Nintendo redesigned the Famicom once more, and developed the Nintendo Entertainment System as we know it today, but this was not enough. Nintendo reasoned that the market may not be receptive to a video game system, but they might be receptive to the concept of an electronic toy that involved a robot. The idea was sent back to Japan, where Nintendo R&D began developing a robot that was capable of interfacing with a video game. Since light sensing was a well understood technology (it was featured in the Nintendo light-gun known as the Zapper), light would be the primary means of communication between the game and the robot. Six different instructions could be given to the robot by a set of flashes that the camera in one of the robot's eyes would interpret. And thus, R.O.B. was born.

R.O.B. first debuted in Japan in 1985 to a luke warm reception. In Japan, R.O.B. was sold together with Block Set, while the second and only other R.O.B. game produced, Gyro Set, was sold separately. This was the reverse in the United States where Gyro Set, renamed Gyromite, came packaged with R.O.B. and Block Set, renamed Stack-Up, was sold separately. R.O.B. was shown at trade shows in the United States and generated enough interest from retailers that they were willing to take a gamble on selling the product in their stores.

R.O.B. debuted right along with the NES in select locations across the U.S. on October 18, 1985. R.O.B. was initially only available through the purchase of the Deluxe Set, which contained the NES, R.O.B., a Zapper, Gyromite, and Duck Hunt. Once the NES rose in popularity, the Action Set replaced the Deluxe Set, containing only one game, Super Mario Bros., which became a strong enough title to sell the system. R.O.B. was released as a stand alone product, but support for R.O.B. was quickly dropped once Nintendo knew that the NES was popular enough to stand on its own without the need for an extra incentive for retailers.

R.O.B. was sold to the European market as Deluxe Set or as stand alone. Whether anymore games were under development for use with R.O.B., or even planned, is unknown. It is commonly speculated that Nintendo only ever planned on using R.O.B. as a "trojan horse" to sneak their system on to the retailers' shelves. To that end alone, R.O.B. was very successful. 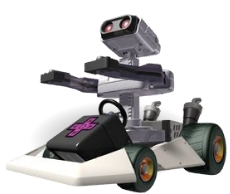 R.O.B. in the standard Kart design

R.O.B made a reappearance in Mario Kart DS. In this game, R.O.B. is a playable character, unlocked after finishing either of the two Mirror classes (either Nitro or Retro) with Gold Trophies on all four cups. He is one of the two heaviest characters in the game (Bowser is the other joint-heavyweight).

R.O.B.'s personal icon, seen on any kart he drives (in the absence of a user-created icon), is an image of an NES D-pad. A victory image depicting him with the other characters shows R.O.B. towering over the other racers, but in play he is average in size. During online Nintendo Wi-Fi Connection play, the original Famicom/NES difference is preserved; Japanese players will race a white Famicom Robot, while North American and European players will use a grey R.O.B. In all worldwide versions of the game, Famicom Robot is the unlockable staff ghost of the Desert Hills course: discernible from R.O.B. by coloring.

R.O.B. has two unique karts, the ROB-BLS and the ROB-LGS. Both are very fast and heavy but have wider handling. The ROB-BLS kart is an adaptation of R.O.B.'s base equipped with the Stack-Up accessory set, a steering wheel and four very small tires. The ROB-LGS is a tall set of stylistically matched legs with one large tire in back and two small tires in front.

R.O.B. is the fourth non-Mario-related character to appear in a Mario Kart game; the first three were Pac-Man, Ms. Pac-Man, and Blinky in Mario Kart Arcade GP.

R.O.B. appears in Super Smash Bros. Brawl as a playable character that needs to be unlocked. He also has a part in the story mode of the game.

The following 6 pages are in this category, out of 6 total.