Star Wars: Rogue Squadron is a Star Wars game taking place between the time periods of the movies A New Hope and The Empire Strikes Back. Players take the role of Luke Skywalker to pilot various spacecraft such as X-Wings and Y-Wings. Famous characters help back up Luke, such as Han Solo and Wedge, although in most cases they do not affect gameplay.

The game was alternately released under the name Star Wars: Rogue Squadron 3D for the PC. 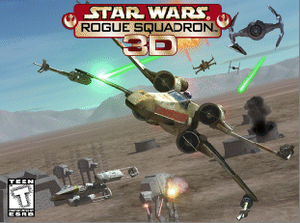 The splash screen of the Rogue Squadron 3D launcher (a.k.a. the title screen).