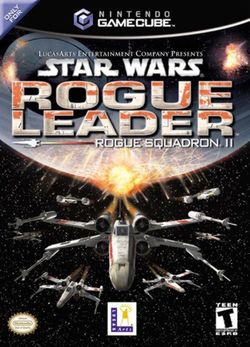 The game follows Star Wars Rogue Squadron, which, under the command of Luke Skywalker and Wedge Antilles, uses starfighters to engage and defeat the Galactic Empire. The game is set during the original Star Wars trilogy and recreates battles that take place during those films. Some levels are based on Star Wars novels and comic books from the 1980s. The game features a "making-of" documentary. According to this documentary, the game was assembled in roughly eight months.

Rogue Leader was developed as a sequel to Star Wars: Rogue Squadron. It features significantly improved graphics and a new tactics menu that allows the player to form up their squadron or set a target for their squadron. The game features more unlockable content. This is one of the few GameCube titles to make extensive use of bump mapping and other advanced multitexturing effects.