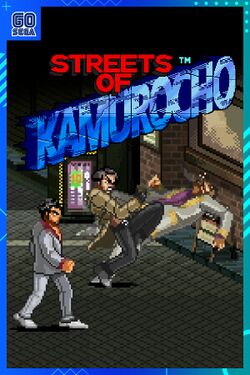 Streets of Kamurocho is a crossover beat 'em up of Streets of Rage gameplay with Yakuza characters. It is only available on Steam from October 17 to October 19, 2020 as part of Sega's 60th anniversary.

There is only one stage, a reskin of Streets of Rage 2's first stage, with bosses from the first Yakuza. After it's cleared, it loops and starts over. Both playable characters Kiryu and Majima play like Axel in SOR2. Ichiban from Yakuza: Like a Dragon can be unlocked as the third character, but he also plays the same.