There are a couple of techniques which will get you an almos certain goal if you pull them off. One is the aim a long straight shot just inside the post. It works on either side of the goal; just line your player up with the inside of the post, run straight toward the goal an hit a shot from way outside the penalty area. Experiment with where and when to take your shot and it will become very easy to score from long range. The other way to score an almost certain goal is to aim a diagonal shot into the bottom corner of the goal. This is a bit more difficult as you need to get quite close to the goal, but as long as you are lined up correctly it will usually go in. This works so well because diagonal shots seem to travel much faster than straight shots. Using the pass (A-button) is even better than the shot (B-button) if you are closer to the goal.

Always use shoulder charge to tackle unless your player already has a yellow card (see Cards section below). The shoulder charge is much more successful than the slide tackle as it is harder to dodge, and although you will run the risk of getting yellow or red cards, it is usually worth it. If you really do prefer using the slide tackle, make sure you time it perfectly and don't tackle a player from behind.

It is recommended that you always use the short pass

as it is quick and accurate. Longer passes run the risk of missing their intended target or being intercepted. However, this really comes down to the style of football you wish to play.

Press down once, take corner with

, run right to meet it, header or volley ball at the near post.

Always aim for one of the corners as there will be less chance of the goalie saving it. When you have a penalty against you it's very difficult to save (harder than in shoot-out mode. The best way is to just predict in your mind where it might go and dive that way as soon as the player kicks. TIP: They usually aim for the bottom corners.

Shooting direct is pointless. Best to pass it short and work a move as you would in open play.

Hit them straight forward as far as you can and try to head the ball on with one of your outfield players.

Throw-ins are pretty useless in Super Soccer, but the best way to use them is to throw it to the nearest man then try to run into some space to create an attacking move. 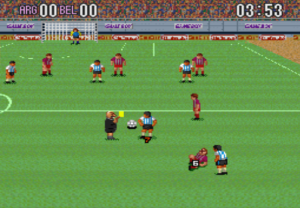 Diego of Argentina gets booked
Retrieved from "https://strategywiki.org/w/index.php?title=Super_Soccer/Playing_tips&oldid=856819"
Hidden category: