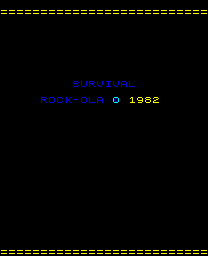 Survival is a multi-directional shooter arcade game that was released by Rock-Ola in 1982; it runs on Amstar's Phoenix hardware (an Intel 8085A, running at 2.75 MHz), but with a General Instrument AY-3-8910 for sound. The player must use an 8-way joystick and a single button, to take control of a blue cell, whose objective is to shoot medicine into viruses through eight mazes made up from rectangular veins and thin cell membranes - and every vein, membrane, and virus that is shot will disappear from the current maze. The colour of the first virus you shoot will determine the colour of resurrected ones; and once every virus on the screen is the same colour, they can no longer be shot. But when the last membrane in the current maze is destroyed four "Aid Stations" will appear in the corners for a while - and you will have to gain extra shots by reaching one of them before they turn back into veins. Every time you reach an Aid Station and gain extra shots, you will also gain a white cell; once you gain five of these, you will receive an extra life. This is also the most obscure of all the Rock-Ola videogames.