This is the first game in the Asterix series. For other games in the series see the Asterix category. 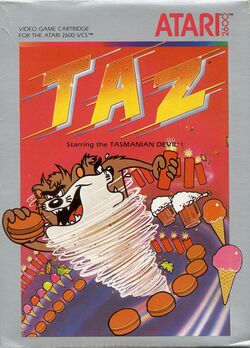 Taz, released as Asterix outside North America, is an action game based on Taz from the Looney Tunes cartoon, and was released in 1983 by Atari for the Atari 2600. The two games are identical except for the player sprite, which is either Taz in the North American version, or Asterix' face in other versions.

The gameplay is rather simple. The player guides Taz between the stage lines in order to eat hamburgers and avoid the dynamites. The game does not use any buttons and the difficulty increases by increasing the speed of the objects on screen. As the game progresses, the burgers may change into other edible or drinkable objects such as beer kegs, hot dogs, etc. There are not many sound effects in the game except a blipping sound when the player hits an edible object and another sound that resembles of explosion when the player hits dynamite.