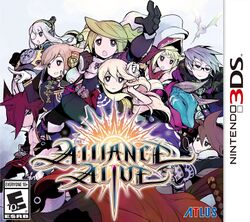 The Alliance Alive is an RPG that was released for the Nintendo 3DS on June 22, 2017 in Japan and on March 27, 2018 in other regions. It was developed by Cattle Call with design work by GREZZO and published by FuRyu. It received a high-definition remaster and was released as The Alliance Alive HD Remastered for the Nintendo Switch and PlayStation 4 in October 2019. The remaster was later ported to Windows on January 16, 2020 and Android and iOS in Japan on February 1, 2021.