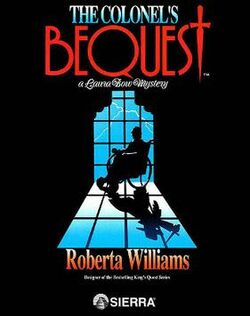 The Colonel's Bequest is a mystery adventure game by Roberta Williams. It is a spiritual successor of the earlier game Mystery House. It features a female protagonist, journalism student Laura Bow who finds herself in among a series of murders. Set in the 1920's, the plot owes much to classical detective Poirot-esque fiction.

The game is unique compared to other productions of the company, in that it featured a simulated "real time" action. It features a cast of characters, each with his own backstory, providing information and found to different locations as time advances. The game progress relies heavily on the player's exploration; the player needs to be in the right place at the right time for an event to occur even if it means tediously and repeatedly visiting locations.