From StrategyWiki, the video game walkthrough and strategy guide wiki
Jump to navigation Jump to search
The Neverhood | Table of Contents | Gameplay | Walkthrough 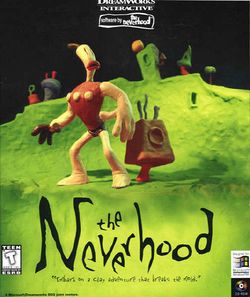 The Neverhood (released in Japan as Klaymen Klaymen) is a 1996 Windows CD-ROM adventure video game created by animator Doug TenNapel and released by DreamWorks Interactive Studios. It features claymation graphics and music by composer Terry Scott Taylor. The Neverhood received positive reviews, but was not a commercial hit, its release coinciding with the mid-1990s decline of adventure games that also caused the failure of other critically acclaimed games such as Grim Fandango. A sequel to The Neverhood was released in 1997 and 1998 for Sony's PlayStation video game console entitled Skullmonkeys. It was not an adventure game like the first installment, but rather a platform game.

Klaymen is the protagonist. The game follows his adventures through The Neverhood, solving puzzles and getting out of difficult situations in order to discover the Neverhood's mysteries. He is a curious and cheerful being. He saves the creator of the Neverhood, Hoborg, from his deep sleep and ruins evil Klogg's plan, or, depending on the player's final choice for the ending, takes over the throne. He never speaks at all throughout the game, until he reawakens Hoborg and introduces himself.