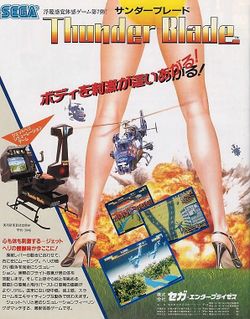 Thunder Blade (サンダーブレード, Sandāburēdo?) is an arcade, flight-based, third-person rail shooter originally released in 1987. In the game, players control a helicopter to destroy enemy vehicles. The game's plot and setting resembles the 1983 film and 1984 TV series of Blue Thunder. The player controls a helicopter using guns and missiles to destroy enemy tanks, helicopters, etc., to save his home country. Levels are in both a top-down or third-person perspective view. The boss levels are in the top-down view.

The game was released as standard stand-up arcade cabinet that introduced the use of force feedback, as the joystick vibrates during gameplay. A sit-down unit was also released, replacing the force feedback with a seat that moves in tandem with the joystick.

A follow-up, Super Thunder Blade, was released exclusively for the Sega Mega Drive/Genesis as a launch title.