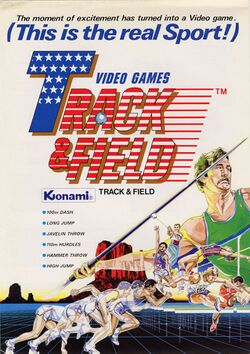 Track & Field was the originator of the button mashing sports genre. While button mashing has gotten a negative connotation during the later years of fighting games as a method of attempting to play without any skill, button mashing was the key to success in this six event competition. Originally released as Hyper Olympic in Japan by Konami, the game paved the way for future sports titles based on decathlon events. The game's release was intended to tie in with the 1984 Summer Olympic games which were held in Los Angeles. A sequel to the game was released entitled Hyper Sports (Hyper Olympic '84 in Japan).

Atari snapped up the rights to bring this massively popular arcade game home in North America. One particular control scheme involved rocking the joystick to the left and right as fast as possible to make the athletes run. However, this practice had a tendency to lead to a lot of broken joysticks. Atari later provided an alternate controller that closely mimicked the arcade version's control scheme. In Japan, Konami ported the game to the MSX home computer and the Famicom. On the MSX version, the game was released over several volumes, 4 events per volume, and added the 400 meter and 1500 meter dash. On the Famicom version, only the first four events were included. For more information about the North American release on the NES, see Track & Field (NES).