Trauma Center: Under the Knife 2

Trauma Center: Under the Knife 2 | Table of Contents | Gameplay | Walkthrough 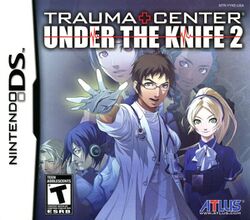 Dr. Derek Stiles, the protagonist, and his nurse, Angie Thompson, travel to the African nation of Costigar to help out at one of their hospitals. While there, they begin to research a new fever, which becomes serious enough for Derek to use the Healing Touch on a patient. Soon after this, Derek and Angie are called back to the Caduceus headquarters, Derek’s medical organization, to investigate a new GUILT-related disease tentatively called Post-GUILT Syndrome.

The gameplay is much easier; The defribilator are easy to use. The syringes don't have any lack. And the sutures don't need too much zigzag. Also, there is a special gadget to change the difficulty whenever the player play and the stages are arranged so the player can play it anytime they want. Trauma Center Under the Knife 2 really use the function of stylus, touch screen, and the microphone. There is a lot of tools to use; antibiotic gel, syringe, sutures/stitches, the drain, laser, ultrasound, scalpel, and the forceps. Also there is additional tools like bandages, defibrillator, air compressor, wire, and penlight. The player can also use the Healing Touch to slow the time.

The story continue from Derek Stiles successfully eradicated previous GUILT (Gangliated Utrophin Immuno Latency Toxin). Which 3 years to go, Derek Stiles still working with Caduceus, running his task in Republic of Costigar, Africa. He did several operations while a rookie surgeon Adel Tulba met him. Dr. Stiles found a new disease in Africa (called "Fever") which forcing him to use the Healing Touch to save the patient. After that, Adel Tulba joined Dr. Stiles go home to America to learn more about surgical technologies.

After arrived at Caduceus USA, there is a new disease due to past GUILT, called PGS (Post-GUILT Syndrome). Derek Stiles must arise his Healing Touch first in order to fight these diseases. Then, A lady who infected by GUILT (especially Kyriaki) three years ago in Hope Hospital (Where Dr. Stiles started his work there)named Linda Reid, infected by PGS on her lung. Derek Stiles heal her and the other PGS victims until a PGS victim named Emillio Juarez. On his liver transplantation, his liver infected by a new GUILT(Neo-GUILT) called Nous.

A new organization named Acropolis wanted to help Caduceus, by the Reina Mayuzumi is the leader. She have an amino acid puzzles for Dr. Stiles to solve. She put cameras on Derek's head to receive the Healing Touch sample, to make dangerous uncommon surgeons with Healing Touch. After a few days, Elysium, where Emillio's quarantined, get a GUILT outbreak. Emillio and his nurse Heather Ross and the other employees infected by Kyriaki. Dr. Stiles wanted to save them all but probably Emilio's died after the other surgeries.

The Emillio's death made Dr. Stiles got trauma and losing his Healing Touch, while he's operating on Adel Tulba with the disease from Africa. So, Robert Hoffman, the leader of Caduceus operated Adel Tulba. Dr. Stiles sent back to Hope Hospital where he started his first doctor job, for rehabillitation. Angie visited Dr. Stiles, and Dr. Myers recommended Dr. Stiles to join Angie meet Angie's father. After they met her father, his father get a PGS. Forcing Dr. Stiles to do the operation with uncommon tumors in the heart. Dr. Stiles regained his Healing Touch to treat the incredible blinking tumor.

After time passed, a new organization named Hand Of Asclepius(HOA), with Patrick Mercer is the leader, teamworking too with Caduceus. They made a group of surgeons with high focus. Adel Tulba who knew Dr. Stiles not operating on him, disappointed and left Caduceus. He joined Hand of Asclepius than Caduceus. Then, the other GUILT strain 'Tetarti' infected a people. The Tetarti is in the other colors form and faster.

An attack attacked Acropolis, which one of the terrorist kidnapped Reina Mayuzumi. Dr. Stiles found a Delphi's headquarter and saved Reina Mayuzumi, which infected by the other GUILT strain 'Pempti'. Heather Ross from Elysium left Elysium and joined Caduceus, which assisting Derek in one PGS victim. Then, GUILT outbreaks happened at the city, the station, and the hospitals. Caduceus crews must neutralize the GUILT.

A day after that, Dr. Stiles and Angie Thompson joined the polices to investigate Delphi's HQ. Which the terorrists kidnapped Dr. Stiles and Nurse Angie to their deepest headquarter. They must heal one of the terrorist and under arrested in a basement prison. They broke the door's seals and called Caduceus for help. Then they joined the other Caduceus crews and the polices to investigate the basement. Dr. Stiles must operate on Erich von Raitenau, the leader of Delphi, and his son and daughter from the GUILT. After the surgery, Delphi is finished to an end.

GUILt are not end here. HOA and Acropolis suspected to be teamworking to making Neo-GUILT. Derek found the second one on a secret patient, Bythos, and it was injected by Acropolis. Dr. Stiles and Nurse Angie visited HOA to visit Angie's father, Blackwell, who joined HOA to investigate the HOA. GUILT symptoms are infected the HOA's surgeons. Making a group of aneurysms on their brains. Adel Tulba wanted to see Dr. Stiles at the main office. Dr. Stiles, Nurse Angie, and Blackwell get in to the office alone. Meeting Adel Tulba. Adel Tulba said he has Healing Touch to kill peoples, by creating Neo-GUILT. Suddenly, Adel felt a pain on his lung, which is the third Neo-GUILT 'Sige'. Dr. Stiles must operate on him too to kill the GUILT.

Dr. Stiles, Angie Thompson, and Heather Ross joined polices to investigate HOA's and Acropolis' main headquarter under a plant. Polices got burned and Dr. Stiles must treat them. After a couple rooms, they met Patrick Mercer with his wife Tracy Mercer. Heather Ross is the Mercer's daughter. Mercer injected Neo-GUILT 'Bythos' to his wife to waking her up, but it's no use. Dr. Stiles must treat her for Heather's sake.

After proceeding to the other room, they met Reina Mayuzumi, with a lot of tanks. Reina Mayuzumi injected herself by the fourth Neo-GUILT 'Aletheia', making her very old. Dr. Stiles performing the operation to kill Aletheia, with the medicine given by Tyler Chase, and with Dr. Stiles' Healing Touch, the Altheia died. And GUILT once again come to an end.

The GUILT still evolving from time to time. To eradicate the GUILT, Dr. Stiles must do 7 operations with different GUILT. Which is Kyriaki, Tetarti, Pempti, Nous, Bythos, Sige, and Aletheia with extreme difficulties. This is known as Extra Operations or X Operations. Then GUILT will eradicated for now and later.