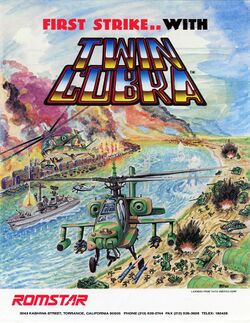 Twin Cobra, is a vertically scrolling shooter developed by Toaplan and released in arcades in 1987 by Taito in Japan and Europe, then in North America by Romstar. It is a sequel to the 1985 arcade game Tiger-Heli Controlling the titular attack helicopter, the players must fight endless waves of military vehicles while avoiding collision with their projectiles and other obstacles. It was the fourth shoot 'em up game from Toaplan, and their tenth video game overall.

The game is known as Kyuukyuoku Tiger (究極タイガー, Kyuukyuoku Tiger? lit. Ultimate Tiger) in Japan, which continues the tradition set by Tiger-Heli to include the word "Tiger" in the title of each game in the series. Subsequent Japan-only sequels would use the same title. The game was originally released in arcades, but subsequently received a Famicom/NES version, a PC Engine version (which never saw a Turbografx-16 equivalent) and eventually a version for the Genesis. The FM Towns version is arcade perfect but was released 7 years after the arcade cabinet. It is much harder than the other home versions as it penalizes much more harshly on continue points.

The helicopter comes equipped with a default forward-firing weapon that is able to hit both air and ground targets, as well as a finite supply of bombs which hit enemies in a wide radius for massive amounts of damage. The player can find power-ups by shooting down the relatively sturdy Chinook enemy choppers, which initially allow the player to upgrade their standard gun to include more shots, but will eventually allow them to pick up weapons that can fire in different patterns. These include a four-way shot that fires in the four cardinal directions and a spread shot that fires forwards and outwards in a cone. The player can also find additional bombs by destroying this type of enemy.

At the end of each stage, and occasionally partway through, is a boss. These take considerably more damage than regular enemies and can fire a lot more projectiles as well. Twin Cobra was a success for Toaplan, garnering positive reception from western critics and earning several awards from Gamest. The game was met with mixed response from magazines, specifically the home versions. In 1995, the sequel Twin Cobra II was released.