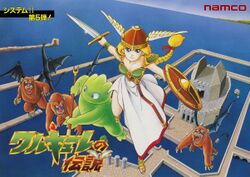 Valkyrie no Densetsu (ワルキューレの伝説, lit. Warukyuure no Densetsu) is a platform/shooter arcade game that was released by Namco in 1989, only in Japan; it runs on Namco System 2 hardware, and is the sequel to an old 1986 Famicom game known as Valkyrie no Bouken: Toki no Kagi Densetsu. It was also included in the fifth volume of the Namco Museum series for the Sony PlayStation, under its English-translated title of Legend of the Valkyrie, much like how Genpei Touma Den, which had been released three years earlier, had been released as part of the fourth volume under the title The Genji and Heike Clans - and much like that game, it uses a Yamaha YM-2151 FM sound chip for its songs but it uses the C140 custom sound chip for its effects and speech (as opposed to a PSG and a DAC).

The players must take control of the eponymous Valkyrie (who, for those of you who have not played the original Valkyrie no Bouken, is not an actual Valkyrie from Norse mythology but a warrior maiden from the heavens, who happens to be named after them), with her newly-introduced sidekick Kurino Sandra (an anthropomorphic green lizard-man, who despite his name is male, and his resemblance to a lizard is not obvious); the pair must make their way through eight multi-scrolling stages by firing shots from their sword and trident at the various enemies that approach them, and the bubbles and coins that most of the enemies in question shall leave behind when they are killed can be collected and later exchanged for magic spells with Babasama (an elderly male sorcerer), along with special weapons and extra energy with Zoul (a travelling salesman who transports them to his own realm).

Sandra would later go on to get a game of his own, named Sandra no Daibouken: Valkyrie to no Deai for the Super Famicom in 1992, which was also released in the United States and Europe as Whirlo.