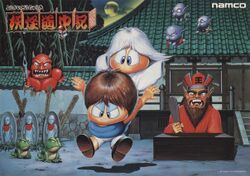 Youkai Douchuuki (, Youkai Douchuuki? lit. "Phantom Travel Journal") is Namco's first 16-bit arcade game, released in 1987. It is a platform game in which the player controls a boy named Tarosuke travelling through "Jigoku" (the Japanese concept of Hell) fighting off yokai (mythical Japanese monsters) on his way to his final fate, as determined by Buddha. He destroys his enemies by firing small "Ki" bullets, which can be charged to increase their power; however, if over-charged, he is left unable to move or fight for a few seconds.

The game is often referred to as "Shadow Land" in English, this is due to a ROM hack that someone released with the words "Shadow Land" above the Japanese title screen. This version of the game has never seen an official release. The game was ported twice in 1988, first to the PC Engine and then to the Famicom. Many versions were released on Virtual Console solely in Japan. The PC Engine version was first released on the Wii Virtual Console on February 20, 2007, followed by the arcade version which was ported over and released on April 28, 2009. Much later, the Famicom version was released for the Wii U Virtual Console on February 25, 2015.

Tarosuke has a life bar (labeled as "POWER") but only one life; if the meter is empty, the game is over (unless he has a certain item). There are no scoring systems, but this game utilizes currency (only referred to as "MONEY") which is used to buy items, among other things. During boss battles, Tarosuke kneels at a shrine to Buddha and prays, summoning up "Monmotaro" - a spirit who floats in the air and drops energy balls on the boss and any lackeys that may appear.

There are a total of five stages and there are multiple paths which can be taken in many stages. One of the paths leads Tarosuke to a fairly racy mermaids' dance hall show, after which he is given a box. If he opens the box, he will either receive 10000 in money, or be transformed into an old man until he buys a particular item in Yorozu-Baba's shop (this is based upon that tale of Urashima Tarō). There are also five different endings in this game, which are dependent on your performance through the final stage.