Zork II: The Wizard of Frobozz 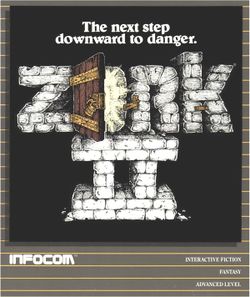 Zork II: The Wizard of Frobozz is a Text adventure game released by Infocom in 1981. It is the second of the original Zork trilogy, starting immediately at the end of Zork I: The Great Underground Empire and leading immediately into Zork III: The Dungeon Master, however it is unnecessary to play all of them to get full satisfaction out of the individual game.

The player controls an unnamed adventurer by reading descriptions of his surroundings and typing text commands such as "north" (shortened to "n") or "hit troll with sword". In this way, the player must solve puzzles by moving and manipulating the objects he finds, and eventually escape, or rather, move onto the next game.

The adventure starts in the Barrow, which was the ending room from Zork I, and the player sees a "strangely familiar" lantern and sword near him. He must bring these with him as he navigates through this maze to recover treasures and accomplish some other initially unknown tasks, all while avoiding death by Grues and other perils.