Roughly five hundred years before the Incident of AVP2, a Predator spacecraft encounters the planet LV-1201, which was previously unknown to them. A lone Predator is sent out to hunt game. He encounters a verdant world, full of dangerous prey including a carnivorous, moose-like creature, a hulking, bipedal reptile capable of disguising itself as part of the terrain, and a wormlike organism which attacks from underground. Quickly, however, the predator discovers more dangerous prey: xenomorphs. The Predator follows them to their hive, through ancient Pilot ruins, where he discovers and activates an ancient Artifact which has the power to keep xenomorphs at bay.

Eight months later, the Predators have built a sort of hunting lodge or base camp around the Artifact from which to organize hunts deeper into the hive. The player's Predator descends, with some companions, deeper into the hive, in search of the xenomorph queen. However, an alarm from the facility cuts their hunt short. The Predators return to the facility to find it overrun by xenomorphs; the Artifact has been powered down. The Predator fights through hordes of xenomorphs, restores power to the artifact, and then attempts to restore power to Pilot-built stasis fields keeping bays of xenomorph eggs from hatching. While manually repairing one field generator, the Predator is surprised by a facehugger—and both are caught in the newly-activated field.

The Predator awakens five hundred years later, when the field is deactivated. He recovers his mask and makes his way to the now-ruined Artifact Chamber, where a human (Dunya) is making off with the Artifact. He pursues her through the infested ruins of the Predator facility. Finally, he tracks her to the Pods. He infiltrates Pod 5, inadvertently allowing hundreds of xenomorphs inside with him. He hacks into the human systems to learn the location of the Artifact, which he retrieves. He then breaks into a communications room and transmits a signal to his fellow Predators in the Nodus Secundus system, nine weeks away. Presumably, this transmission is the reason for the Predators' visit in AVP2. Immediately after sending the transmission, the Predator is killed when the alien chestburster incubating inside him bursts from his ribcage.

The alien begins its game as a facehugger inside the Predators' facility, five hundred years before the Incident. The facility's integrity has just been breached, and the facehugger must sneak through the complex, seeking a solitary host. If it attacks and subdues a Predator in the sight of others, it will be killed before it can implant its embryo. The facehugger scurries through vents and under floor grating, using occasional xenomorph attacks as diversions. Finally, it locates one Predator attempting to repair a stasis field generator below the facility. It strikes—but both creatures are overcome by the rising stasis field.

The alien emerges from its host five hundred years later, inside Pod 5. Now a chestburster, it must find a food source while evading human guards. It makes its way through vents, corridors, and a lavatory to the Pods' morgue, where it feeds and molts into an adult.

When fully-grown, the Predalien stalks and slaughters its way through Pod 5, seeking the Artifact which its host was carrying. Its path back to its host is now blocked by wreckage from the humans' battles with other xenomorphs, so the Predalien must find an alternate route. It cuts through the botanical labs and nears the Artifact when sirens start going off—the Pod's supports are going to be detonated. The alien abandons the Artifact in order to save its own life. It fights through a small army of combat synthetics and armored Exosuits, finally escaping through a vent near the pod's generator. It flees with several other aliens along a support girder just before the supports are destroyed. 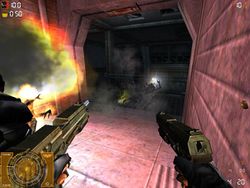 Dunya's game begins five weeks before the Incident in AVP2. She is spending some quality time with her fiance Dimitri when they are interrupted by a call from their mutual superior officer, General Rykov. Rykov asks to meet with Dunya immediately, explaining that they have "found a buyer." When they meet, Rykov explains that Dunya is to retrieve an Artifact discovered during a synthetic-team exploration of Zeta Site. The synthetics were quickly destroyed, but they transmitted information about the Artifact back to Rykov. Doctor POst, a scientist in Rykov's employ provides Dunya with a "worm device," designed to hack into Pilot technology and shut down systems indiscriminately so that she can retrieve the Artifact.

Dunya, Serge, and Decker (two other Iron Bears) infiltrate Zeta Site while the Weyland-Yutani guards have been conveniently incapacitated. They descend to the hive, where xenomorphs overwhelm the other two—Dunya is the only survivor. She runs through the hive, scavenging supplies from the destroyed synthetic expedition. When she reaches the Artifact Chamber, the xenomorphs pursuing her stop dead in their tracks, watching warily. Dunya reports the situation back to Rykov, then installs the worm device. After some time, the Pilot technology around her starts to fail and collapse, blocking her entrance route.

Finally, the Artifact itself shuts down, allowing Dunya to retrieve it. She does so and is immediately accosted by aliens. She escapes by clambering over the ruins to the abandoned Predator facility. She fights her way through dozens of aliens and cunningly-placed eggs to the surface, then across a series of narrow, bridge-like formations spanning a series of rocky hills. She finally reaches a waiting APC, which takes her back to the Pods.

Later, at the Pods, Rykov informs Dunya that xenomorphs have infiltrated the Pod and orders Dunya to retrieve the Artifact from storage. Dunya goes to secure the Artifact, arriving just in time to see the Predator making off with it. Rykov, having encountered Predators before, warns her to abandon the Artifact and evacuate the Pod. She arrives at the main elevator, but learns that her fiance Dmitri went to seal the breach which allowed the xenomorphs entry, and he has not been heard from since. Dunya tells the others to evacuate the Pod, insisting that she will keep the cargo area clear until her fiance returns. Using a mounted minigun and a few automated sentries, she does just that. She and Dmitri evacuate the lift, and Rykov detonates the supports keeping Pod 5 attached to the rest of the Pods. Pod 5 crashes to the valley floor below.