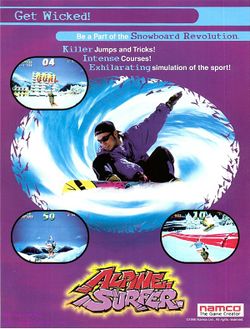 Alpine Surfer is a snowboarding arcade game that was released by Namco in 1996; it runs upon the company's System 22 hardware, and is the "sort-of" spin-off of Alpine Racer, which was released two years earlier. The players, as two can play simultaneously when two single-player cabinets are linked together, can choose to freeboard or gate race on one of two courses under one of the same amount of difficulty levels, while performing various air tricks (they control the trick type by turning and edging the virtual snowboards they stand upon just before they are about to jump), and there's also a hidden character (similar to Alpine Racer's "Penguin") who can get activated by holding down both Selection Buttons and pushing the Decision Button seven times upon the mode selection screen - however, as the game does not work properly in MAME, the precise identity of the hidden character is not known.