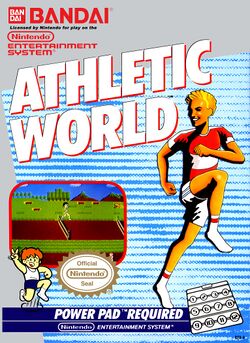 Athletic World is a video game developed and published by Bandai for the Famicom in 1986. It was the first of ten games Bandia released for the Family Trainer series. The game required the use of the Power Pad and simulated 5 different Olympic-style challenges. It is one of 11 games designed to incorporate exercise with a game playing experience.

As part of Nintendo's Power Pad Series, Athletic World played exclusively with the floor pad. Movements in the game were controlled by the player physically running, jumping, and stepping on the pad in a similar fashion to modern dance pad games. There are 3 levels of difficulty for a player to choose from; Training, Beginner, and Expert. Players can test themselves in any of the 5 challenges the game offers, which include:

Each challenge is designed to train you in a different manner. Hurdles tests you on timing, while Dark Tunnel challenges your dexterity. This game also offers the unique feature of having your game play experience tailored to you by asking for your Name, Age, Gender, and the current date to provide you customized advice.

It was announced by Bandai Namco that this game will see a remake in Japan in 2008 for the Wii, renamed in North America as Active Life. The game will also feature the Family Trainer (Japanese version of the Power Pad) for this console.