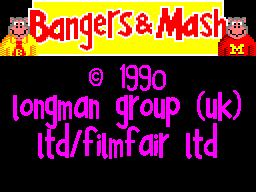 You will first have to connect your Sinclair ZX Spectrum, Amstrad CPC or Commodore 64 and cassette recorder to your television, then switch all three of them on; you will then have to place the cassette of Alternative Software's Bizarre Developments-developed 1990 platform game Bangers and Mash into the cassette recorder, rewind it (unless it is your first time playing it), and press the play button, type LOAD "" (without leaving a space between the quotation marks) and press Enter to load the program into the console. The game's title screen will then be displayed for a few seconds, and the text "STOP TAPE" will then appear on it - and once you have done so, the text "© 1990 LONGMAN GROUP (UK) LTD/FILMFAIR LTD" will be displayed on the screen, as seen in the screenshot above (the Longman Group had published the books by Paul Groves and Edward McLachlan on which the show was based, which are now out-of-print, and had also released that original SuperTed game for the Sinclair ZX Spectrum in 1984). You will then have to press Space or the button on the joystick to start the game; the fruit counters for the first level start at "32" (bananas), "27" (apples) and "23" (pears).