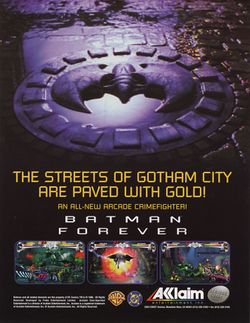 Batman Forever: The Arcade Game is a "2.5-dimensional" beat 'em up arcade game developed by Iguana Entertainment for Acclaim and released on May 7, 1996; it runs upon Sega's ST-V hardware, and was later ported to the Sega Saturn, Microsoft Windows and Sony PlayStation platforms. Based upon the 1994 film of the same name, which had already begat an earlier game developed by Probe Entertainment for Acclaim, in 1995, the players must use eight-directional joysticks to take control of Batman himself (1P) and his sidekick Robin (2P), with three buttons that make them perform various attacks on a constant stream of mostly-unnamed enemies (and whenever they hit one, an explosion with the text "XX% DAMAGE", with XX being the percentage of damage they inflicted, shall appear).

The game also features several powerups (including Batarangs and Batropes from the first Batman arcade game, Gas Guns, Metal Cutters, and "Holo Mode" which generates four hard-light holograms of the heroes that'll mimic their movements and attacks), end-of-stage bonuses (including a "Highest Round Score Bonus", a "Highest Combo Bonus", a "Hero Bonus", a "Crime Buster Bonus", a "Super K.O. Bonus", a "Bat-Signal Bonus", a "Yin-Yang Bonus", and a "Riddler Bonus"), and bosses (which include Two-Face and that aforementioned Riddler); however, operation of this game's cartridge will not work for the ST-V's "Multi-Cart" mode, and the text "PLEASE CHECK THE GAME CARTRIDGE FOR IMPROPER INSTALLATION" will flash up on the screen if its cabinet has been set up as such.

Based on movies:
Based on cartoons:
Spin-offs:
Sub-series:
Retrieved from "https://strategywiki.org/w/index.php?title=Batman_Forever:_The_Arcade_Game&oldid=962065"
Categories: