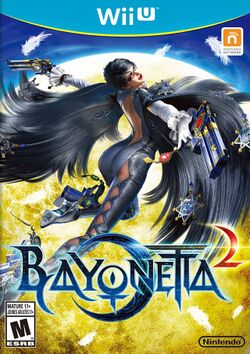 Bayonetta 2 (ベヨネッタ 2, Beyonetta Tsuu?) is a hack and slash game developed by Platinum Games and published by Nintendo for the Wii U, with Sega as the franchise owners serving as its advisor. It is the direct sequel to the 2009 game, Bayonetta, and is being directed by Yusuke Hashimoto and produced by Atsushi Inaba, under supervision by series creator Hideki Kamiya. It was announced on September 13, 2012, and is exclusive to the Wii U, unlike the previous game which was available on the PlayStation 3 and Xbox 360. The main character, Bayonetta, sports a new costume and hairstyle and the game itself features a new two-player mode. The game will also be the second Bayonetta product to receive Japanese voiceovers, using the same cast that voiced the Bayonetta: Bloody Fate anime film by Gonzo. The game was released in 2014 and includes a port of the original Bayonetta as a separate disc inside the case.

Starting a few months after the events of the first game, Bayonetta and Jeanne are fighting off a group of angels who attacked a city during a parade. During one particular attack, Jeanne protects Bayonetta from a sudden demon summon gone wrong, causing her soul to be claimed by the depths of Hell. Upon a tip from her informant Enzo, Bayonetta heads to the sacred mountain of Fimbulvinter. An entrance to Inferno, the Gates of Hell, is said to be inside and Bayonetta plans to use it to save her friend.