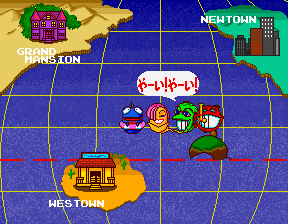 Namco’s Japan-only 1992 electro-mechanical/video game hybrid Bubble Trouble: Golly! Ghost! 2 is divided into five scenes; once you've inserted your coin into the cabinet (the side you play on is based on the slot you chose) and pressed that side's Start Button, another player will have five seconds to insert his coin and join in before the game begins. At the start of each scene, you shall be shown a picture of the scene's bonus character and its point value, along with the point value that must be reached in order to continue to the next scene - and the five 24-volt globes shall then come on to light up that diorama. If an enemy is to appear from the treasure chest (which is in the bottom-left of the diorama), then its lid will flip open; however, if one is to appear from the clam (in the bottom-right), then the top half of the clam will lift itself open. If an enemy is to appear from beneath the sunken ship, then the ship shall move slightly toward the left - and finally, if an enemy is to appear from the trapdoor directly on top of the sunken ship, then that door will open. Once the timer of the scene has run out, the player's score shall be reviewed, and he shall be shown two boxes lifted on a pulley, titled "ZIP" (or "ZAP", if he is playing on the second player's side) and "GHOST" respectively; if the "ZIP" (or "ZAP") box is to move above the "GHOST" box, he shall proceed to the next scene, but if the "ZIP" (or "ZAP") box is to move below the "GHOST" box, the game will be over. In the case of a two-player game, both players will be able to proceed to the next scene, regardless of whether either player loses to the other one - except after the final one, of course.