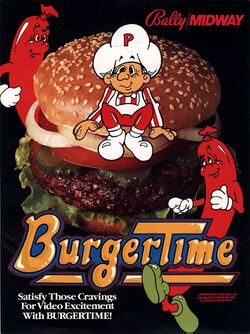 BurgerTime was among the more successful classic arcade games of 1982. Its premise was cute and clever, two winning components for arcade games during that time. You control a hamburger chef named Peter Pepper who has been transported to a world of larger-than-life burgers. Peter Pepper's goal is to assemble every layer of a hamburger by walking over the ingredients until they drop to the level below. But there are bits of food who are out to stop the chef and prevent him from serving his meals ever again. In order to defend himself, Peter Pepper can throw a dash of pepper in his enemies' faces to freeze them in place while he continues on.

BurgerTime's appeal never made it out of the arcade and in to pop culture like other contemporary arcade games, but it was considerably popular enough to get licensed for several home conversions. Mattel Electronics was the biggest licensee, swooping on the title in order to bring it to their Intellivision system, which was often criticized for not having enough arcade titles. In addition, they ported it to some other systems, including their own competition, the Atari 2600. They were even about to publish a version for the ColecoVision, but they went bankrupt, so Coleco bought and published the title themselves. Meanwhile, Data East and Namco formed a partnership that allowed Namco to publish the game for the Famicom (ported by Sakata SAS) in Japan, while Data East published it for the NES in America. It inspired a Game Boy conversion, BurgerTime Deluxe. In 2005, developer Hamster released the game for the PlayStation 2 as part of their classic game series.

Chef Peter Pepper has been transported to a world of living food. Hot dogs, fried eggs, and pickles are out to stop the chef from serving up his culinary delights. But Peter Pepper is determined to stomp out complete and perfect hamburgers for others to enjoy, and he won't let his diminutive size deter him. Armed with nothing more than pepper shakers, he braces himself for a showdown with the enemy food.