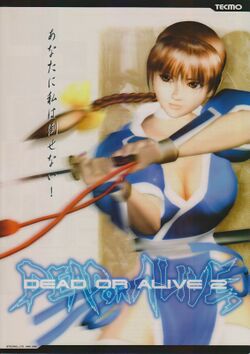 Dead or Alive 2 (デッドオアアライブ2, Deddo Oa Araibu 2?, abbreviated as DOA2) is a fighting game in the Dead or Alive series, developed by Team Ninja and published by Tecmo. It debuted in arcades in 1999 and was later ported for the Dreamcast and the PlayStation 2 in 2000. Several enhanced editions of the game were released.

Dead or Alive 2 improved upon the graphics of its predecessor and on the gameplay system by including many new features. In 2004, DOA2 was remade for the Xbox as part of Dead or Alive Ultimate.

Nine different versions (excluding DOA2 Ultimate on Xbox and the two PSN releases) of Dead or Alive 2 were released: two for the arcade market, and the others were home versions. The Dreamcast port was identical to the arcade Millennium update release, but added the usual Versus and Sparring modes, as well as Team Battle Mode. This version also featured a simplified hold system, which would become standard for the rest of the series. Unlike home ports of the first Dead or Alive game, there were no unlockables in this release. Dead or Alive 2 was the only game that Tecmo published on the Dreamcast.

Dead or Alive 2 was released as a launch title for the PlayStation 2 in Japan. This version added new stages (Crimson, Koku An and Prairie) and new unlockable costumes.

The European Dreamcast version included the costumes from the Japanese PlayStation 2 version, but not the new stages. It also added new costumes for Zack and Tina, which pay homage to The Shadow Man and his love interest from the Shadow Man series.

For the Japanese Dreamcast version (known as the Limited Edition), the most notable addition was that Bankotsubo and Bayman were now unlockable, playable in all but Story Mode. The new stages from the PlayStation 2 version were not included, in favor of new versions of Burai Zenin and L's Castle stages from the first game. This version also added Sparring mode for Tag Battle, Watch Mode, the User Profile System, online play, more costumes to unlock, and a Gallery Mode with character renders.

Tecmo released DOA2: Hardcore for the PlayStation 2 in America and Europe, which was based on the Japanese second update of Dead or Alive 2 for Dreamcast. This version was featuring new playable characters, new stages, extra costumes and introduced the "Gallery" option. The Hardcore release featured many changes compared to its predecessor: Characters, pictures and moves were altered to appear more realistic, lessening the anime-look. Some fighting animations were elaborated upon, while others were cut. New stages were added (8 more than the Dreamcast update). More character outfits were added. Survival Mode now only took place in the "Danger Zone" arena. Overall gameplay speed was increased, and the entire game (including cutscenes) now ran at a full 60 frames-per-second (in the Dreamcast version, the game ran at 60fps, while cutscenes ran at 30). A special "Items Collection" feature and menu section was added to appeal to video game collectors. New artworks were added, and a CG Gallery section featuring renders of the female characters was added. The player history files were enhanced, and now included statistics on how often the player used each character, and tag battle pairing. Several special moves were added, but left undocumented. Kasumi can be unlocked as a trainable 'monster' in Monster Rancher 4 by going to the Shrine, and inserting the DOA2: Hardcore disk in the PS2.

Tecmo followed up on the release of Hardcore in the US and Europe with the release of DOA2: Hard*Core in Japan. This last version saw some minor updates, including new cutscenes, a few new costumes, and a new turbo speed option.