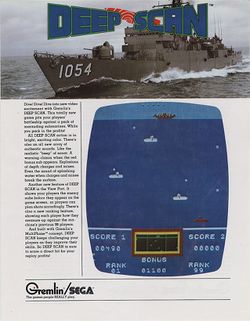 Deep Scan is a fixed shooter arcade game, that was released by Sega on their Vic Dual hardware in 1979 and licensed to Gremlin Industries for US manufacture and distribution; despite the appearance of the flyer you see on the right, it was never released as a standalone game, and was only released in two dual cabinets with Head On 2 and Invinco. The gameplay is similar to that from Gremlin's own Depthcharge - but it is in colour instead of monochrome, features a radar that shows the positions of the enemy submarines before they appear on the screen and has a "rank" in the bottom-right corner of the screen (to show a player how his score measures against those of the 99 previous players). It also features red ("bonus") submarines, and if you manage to drop a bomb on them, you will receive bonus points for doing so; also, if a mine launched by an enemy submarine hits your boat, it will sink it instead of reducing the amount of points you will receive for all the subsequent submarines by half, given that this game is life-based (instead of time-based). When you reach a specific point value, the mines will also begin moving faster - and the more enemy submarines you miss, the more mines will be aimed at your boat. The game ends if you lose your last life (instead of when you run out of time).