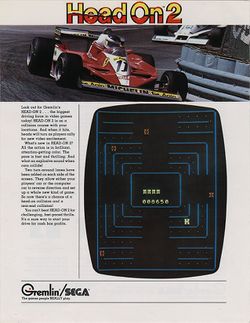 Head On 2 is an arcade game that was released by Sega in 1979, and licensed to Gremlin Industries for US manufacture and distribution; as its name suggests, it is the sequel to Gremlin's own Head On, which was released earlier in the year (Irem had also released a version on their M10 hardware). The player must again use a single button to accelerate a car around a maze (which contains 124 pellets), and a four-directional joystick to make it change lanes while trying to avoid crashing into various other (CPU-controlled) cars that are moving in the opposite direction - and Namco's signature character still had not been thought of, by this time. The main feature that sets this game apart from its predecessor is the two areas on either side of the maze, in which you could make a complete revolution in order to reverse your direction and travel in the same direction as the CPU-controlled cars; however, because your car will still die, if it gets forced to crash into one of the CPU-controlled cars from behind, there is now a chance of a head-on collision and a rear-end collision, and you still have to start the maze over from the beginning, if either of those things happen. There can now also be up to four CPU-controlled cars on the screen (as you can see in that flyer to the right), which may make it even more frustrating.