This is the first game in the Head On series. For other games in the series see the Head On category. 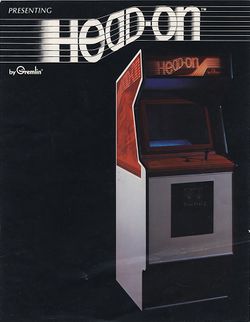 Head On is an arcade game which was released by Gremlin Industries in 1979 (Irem also released a version on their M10 hardware in that same year); the player must use a single button to accelerate a car around a maze which contains 136 pellets, and a four-directional joystick to make it change lanes while trying to avoid crashing into various other (CPU-controlled) cars that are moving in the opposite direction a full year before Namco's signature character was even thought of. But if you do get forced to crash into one of the CPU-controlled cars you will have to start the maze over from the beginning - and this can get frustrating when there are three CPU-controlled cars on screen. Later in 1979, Sega (who had released this title in a dual-game cabinet with Data East's Alpha Fighter earlier in that year) released a sequel named Head On 2; it featured a new maze (which only contained 124 pellets), and areas in which you could make a complete revolution in order to reverse your direction and travel the same way as the CPU-controlled cars; Konami's Fast Lane (released eight years later), also features similar gameplay to this title but has a red sports car in the player role, two blue monster trucks in the enemy roles, and roller-blading women who the player can pick up as he passes them (the trucks will just pass through them) to gain powerups, along with a second button with which to use them against the monster trucks for a 1000-point bonus. It also features twenty-five different mazes (some of which are small, and some of which are big), but if you are lucky enough to finish the last one, the game will not end - because much like several other Konami games from that time period, it will just start again.